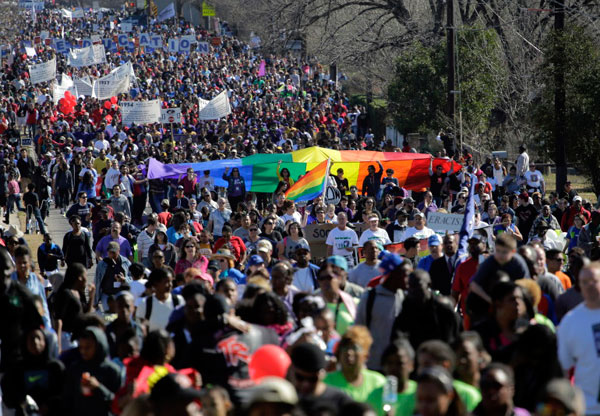 The Rainbow flag stands out at the 2014 Martin Luther King, Jr. March. LGBT groups plan to participate in this year's event on January 18.

San Antonio’s LGBT community will be out in force on January 18 for the city’s Martin Luther King, Jr. March.

“We will be marching in this upcoming MLK march as a reminder that we are still not equal, we are more than marriage. As always, we are marching with the giant flag as individual people united for a just cause and not as any one organization,” writes David Jordan Cisneros, who created a Facebook event page, MLK March – LGBTQ Citizens for Equality.

Groups like the Human Rights Campaign, the LGBT LULAC chapter, Pride Center San Antonio, the LGBT Chamber of Commerce, Stonewall Democrats and others are encouraging their members to attend the event and march as a community along with the giant Rainbow flag Cisneros will bring.

The march, which begins at 9 a.m., is 2.75 miles and starts at the Martin Luther King, Jr. Academy, travels up Martin Luther King Drive, and ends at Pittman Sullivan Park. VIA Metropolitan Transit is providing complimentary bus service.

To access the free Via bus service, riders are asked to park at Freeman Coliseum, 3201 E. Houston St. (Lot 1), or St. Philip’s College, 1801 Martin Luther King Dr. (Lot 22), between 8 and 10 a.m., Monday. The drop-off point for service to the march will be on MLK Drive, west of Upland Drive. The pick-up location for return service will be at Pittman Sullivan Park, 1101 Iowa St. Buses will return between noon and 3 p.m.

In addition to participating in the MLK March, the local chapter of the Human Rights Campaign is sponsoring a “day of service” on Sunday, January 17 at Roy Maas Youth Alternatives, a shelter for kids, one of the few in South Texas that is welcoming to LGBT youth.

HRC volunteers will spend the day assisting with grounds maintenance, participating in activities with the residents and sharing lunch with them.

HRC San Antonio MLK Day of Service, Sunday, January 17 at  from 10 a.m. to 3 p.m. at Roy Maas Youth Alternatives, 3103 West Avenue. If you are interested in volunteering, please email to: [email protected]

Born in New Mexico and based in California, Carla Trujillo is an esteemed fiction writer, editor, educator and a founding...