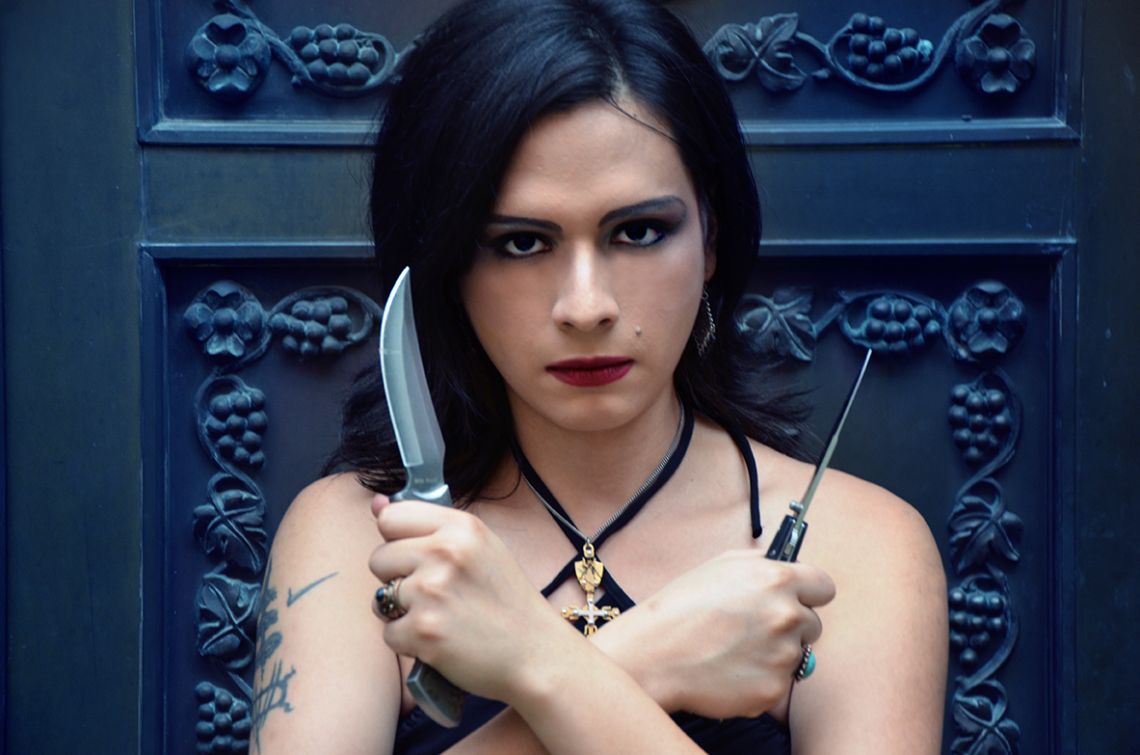 Antemìa Kavillari, 27, is a local transgender Latina artist and musician, and someone I’m proud to call a friend. We met via Facebook in 2015 when we were both at the beginning of our respective transitions, and since then, I’ve seen her blossom into a powerful force to be reckoned with, especially when it comes to her creative work.

Whether its shredding heavy riffs on her guitar or producing intricate works of visual art, she is making her own space for trans representation in places where it’s so desperately needed. I recently spoke with Antemìa about her work, her experiences as a trans woman of color and how San Antonio is doing on trans outreach.

How did you get your start in music and visual art? Is there a medium that speaks the most to you?
My journey began in fall 2008. I composed various soundtrack music with my MIDI as a hobby and started producing ink and acrylic paintings. After a couple of years, I decided to navigate my craft to guitar and continue to strictly work with ink, specifically pointillism. I cannot do one without the other. Both mediums have always been crucial keys to articulating the parallels of trauma and reality. Presently, my themes touch on immortality and biological manifestation. As far as other mediums are concerned, cinema and fashion have always been a stimulant in my life.

What are some current projects you are working on?
Currently, I am producing and collaborating on a project for the upcoming Haunter/Black Vice split LP with Stephen Wilson (Unknown Relic). Red River Family Records will be releasing and distributing the final product. Musically, I am constantly writing for my project entitled Willow. The material is viscerally induced and influenced by an avant-garde form of black metal.

What inspires you to create? Specifically, are there any influential figures who inspire you?
The ones who have come in and out of my path. Not as just a face but as beings who ferociously exist. However, my creations don’t purely stem from inspiration. Truth and justice tend to push the emulations of experience and wisdom. Local artist Libby Del Barrio’s work resonates the same wave I felt when I first discovered Hilma af Klint’s The Five, a group Klint founded with four other women artists who conducted seances and produced 193 abstract paintings over a 10-year span.

Do any of your creative works draw from your real-life experiences? If so, what aspects of your life inspire your work the most?
It’s been a process in producing pieces of my literal experiences. Drawing pieces for others has been a way to connect with those around me outside of my core work. There’s a series I’ve yet to reveal that displays the final moments of my life pre-transition. Particularly, the “death” of the former individual. I put this in the context of my suicidal past by exhibiting the parts of me that survived and the ones that didn’t after this traumatic life chapter. The series will continue to work up to the beginning of my transition, where I finally discover life’s fruits that have sustained me up until the present. Some have rotted, some have preserved. Antemìa Kavillari, The Gaze of Imperfect Proportions Shall Invade Man

How does your identity inform your work?
My first stippling piece, a month pre-transition, is my biological emblem. A lot of it is expressed in a structured collage of esoteric symbols that have been an imprint on my psyche since childhood. One piece, called The Mourning Void, displays my actual body in a desert underneath a liberating and oppressive sun. Specifically, my relationship with nature and how it molded my existence.

More specifically, how has transitioning informed your artwork and music? Has your artistry changed since coming out?
My art made a transition as my body and mind did. So, yes, there’s absolutely a connection. Another series called The Drill is a pre-transition vision I had about my literal lifesavers — the syringe and the estradiol serum — years before I was educated on medical transitioning. The Drill illustrates the biological calling for the missing ingredient my body lacked since childhood. Willow also has a deep connection with this experience.

How have you been received in your creative communities, such as the local metal scene or contemporary art community, as an openly trans woman of color?
I first exhibited my work at Ritual Gallery in 2014. Ally Barrios allowed me to introduce my work in her space, which began my journey. Shout out to her for being such a great critic and supportive friend! It’s always a pleasure to work with Haunter. They trusted my artistic vision to accompany their music and lyrics on their full-length Thirodia released last year. The result was a great success. So shout out to Enrique, Bradley and Mark for allowing me to flourish! As a whole, both worlds have been open to an extent but my work has yet to be embraced. Due to my work’s aesthetic, I know in the back of my mind, some don’t “see” race or gender in my work while others take my identity into account. In a way, it’s this spectrum that feeds into my medium even more. It has been an interesting journey to say the least.

Are there misconceptions or assumptions that people have about you as an artist?
As a trans Latina, inevitably a lot of outlandish archetypes and bigoted/fetishized tropes are projected onto me that make me out to be less than an individual. I can embrace both my identity and my craft despite their contrasting natures. I strongly suggest that others do the same. I can be a real fun and supportive person to be around. I love to hang with my girlfriends, shop for new outfits and makeup, flirt with cute boys, joke about life and definitely indulge in coffee. I’m essentially a teenage girl going through her second puberty while simultaneously maintaining the strength of womanhood. The balance between my life and work can be extremely taxing and exhausting, but I have to keep moving. I’m just trying to nourish as much happiness while I can. And I can also be a sour and bitter person. This past year and a half has been so emotionally and mentally overwhelming that it has affected my relationships. All the injustice and cruelty of this world will do that to a person, but I’m trying every day to be the best person I can. It’s never too late.

How do you think the city of San Antonio is doing in terms of supporting or neglecting the trans community? What sort of changes would you like to see happen in this regard?
Firstly, I cannot thank Dr. Darrell Parsons, Keith Wichinski, and the Nichols Law Firm enough for their work. I don’t know where I would be without them. Secondly, San Antonio’s outreach to the trans community seems to only be connected to queer nightclubs and bars. We are segregated and isolated from one another outside of nightlife until we find ourselves downing shots … are these really places for us to heal, share or be productive? The lucrativeness of the LGBTQ community’s substance abuse and alcoholism is something that holds us back. I would love to see the city push an open public life in community colleges for the trans community, especially trans youth. Alamo Colleges could do wonders in this area if they’d employ trans people to operate and administrate this sector. Similar to the Manhattan LGBT Community Center, where resources are accessible for students, and just the general public. I think this would also be an excellent step for non-trans/queer people to learn about our struggles in a healthy and educational environment. 9 Circles, Bill Cain's 2010 play based on the real-life crimes committed by Private Steven Dale, has made its San...