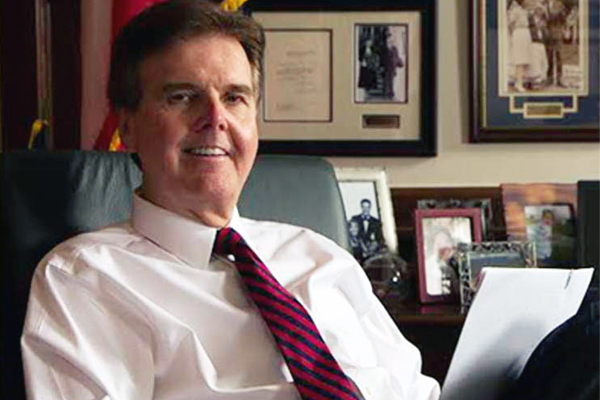 Lt. Governor Dan Patrick says the bathroom bill (SB6) that was introduced last week by state Sen. Lois Kolkhorst, and which he is championing, will not have an economic impact as Texas business leaders have warned.

SB6 bars transgender people from using the bathroom that matches their gender identity.

In an interview with the Texas Tribune, Patrick denied the state would be affected by the proposed legislation saying that opposition to the bill was concentrated among “Anglo liberals” who work in the media.

In North Carolina, where a similar bill was passed, it has cost the state an estimated $630 million in lost business and the loss of seven NCAA championship games. Despite that, Patrick insists the state is doing well.

“Every report of North Carolina shows that they have the second-strongest economy in the country or the second-best place to do business, the second best-place where executives want to move their companies to. It’s having no effect,” Patrick told the Texas Tribune.

On December 7, the Texas Association of Business released a study that estimated Patrick’s bathroom bill could cost the state up to $8.5 billion and the loss of more than 185,000 jobs.

Yesterday, representatives of convention and visitor bureaus from around the state held a press conference at the Capitol in Austin to announce the “Texas Welcomes All” campaign, which opposes the bathroom bill.

Despite Patrick’s bravado, it is not known how well SB6 will fare when it comes up for a vote. Last November, Texas House Speaker Joe Straus said a bathroom bill, “. . . isn’t the most urgent concern of mine . . . I know the lieutenant governor is very enthusiastic about this idea. Let him run with it. We’ll see what the House wants to do.”

Adding his voice to the opposition, State Rep. Diego Bernal said, “Our city’s economic competitiveness shouldn’t be the price we pay for political theater. I believe in equality and human dignity. I will oppose any effort to marginalize our neighbors.”

When local activists Darrell Garcia Parsons and his husband, Jason Garcia Parsons, learned that no local LGBT group was organizing...