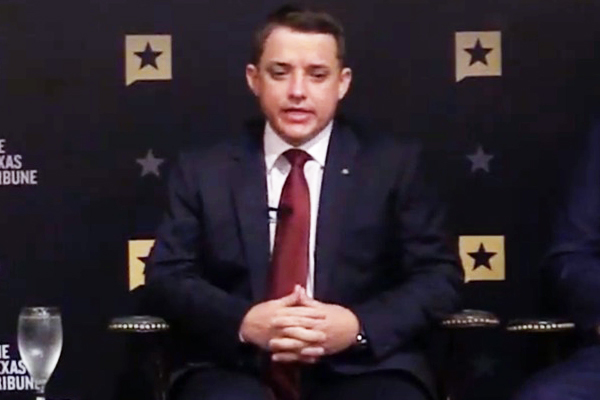 On February 7, the Texas Tribune live-streamed a conversation with three first-time state representatives during which one of them said that allowing transgender people access to the bathroom of their choice encourages “dudes in dresses” to be beaten up.

Participating in the event were Reps. Briscoe Cain (R-Deer Park), Justin Holland (R-Rockwall) and Victoria Neave (D-Dallas). The conversation with the legislators covered a variety of topics.

When the discussion turned to Senate Bill 6, moderator Evan Smith asked Cain what he would say to transgender Texans who believe the bill is discriminatory.

Cain suggested trans people use the restrooms “at your own risk” adding that businesses should not be penalized for violating nondiscrimination ordinances in cities that protect trans people in public accommodations.

“[The bill says] ‘Look, we’re not going to allow government funds or government buildings to be used for social engineering,'” Cain said. “Men need to use men’s restrooms.”

When asked about the possible economic impact SB6 might have, Cain used the example of the Houston Equal Rights Amendment, which was enacted by the city council and later defeated by voters.

“We had this in Houston, we were told if we removed it, we would never get things,” he said. “The voters defeated it. We overturned the ordinance and guess what? We got a Superbowl. It’s that easy. Call the bluff.”

When he ran for the legislature last year, Cain said he favored cutting off funding to cities with LGBT non-discrimination ordinances. A page from a 2016 political flyer that accused Briscoe Cain of being gay. (Image via Twitter)

Accused of being gay

During his campaign for office in 2016, Cain’s opponent, 72-year-old incumbent state Rep. Wayne Smith, leaked a flyer to the media insinuating Cain is gay.

The anti-LGBT flier featured two men kissing in front of a public restroom with the caption: “Briscoe Cain is well known to those who frequent Montrose area night clubs and Gay bars.”

Elsewhere, the flier featured photos of Cain engaged in various activities with other men.

Cain, who is married to a woman and has three children, told the Houston Chronicle the allegations were “baseless,” and that he was “disgusted” by his opponent’s actions.