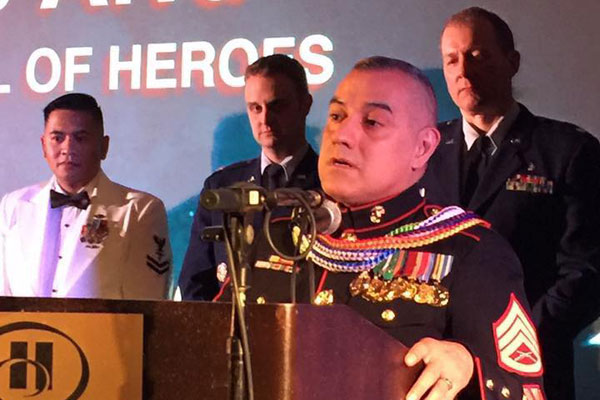 Eric Alva addresses the OutServe-SLDN National Dinner after being inducted into the organization's Hall of Heroes on May 21 in Washington, DC. (Photos: Facebook)

Retired Marine Sergeant Eric Alva from San Antonio was inducted into the OutServe-SLDN Hall of Heroes at their National Dinner in Washington, DC on May 21.

Alva was one of five awardees this year. The others honored were: Aaron Belkin, executive director of the Palm Center; Paula Neira, MSN, RN, CEN, Esq. (LT. USN/USNR 1985-1991); Dr. Grethe Cammermeyer, PhD; and Thomas T. Carpenter, former co-chair of the Forum on the Military Chaplaincy and former member of the OutServe-SLDN board of directors. The awards are given annually to individuals “who have made significant and lasting change in the LGBT military movement.”

In March 2003, Alva was the first soldier injured in the Iraq War when he stepped on a land mine resulting in the loss of his right leg and part of an index finger.

Alva became an advocate calling for an end to the US military’s Don’t Ask, Don’t Tell policy — testifying before Congress and speaking at engagements around the country.

“It was not until February 28, 2007, that I announced not only to the people of the United States, but to the rest of the world that the first American injured in the Iraq war was a gay Marine. I had decided to be true to myself and my country by coming forward and announcing who I am,” he said in a speech in 2009.

When Don’t Ask, Don’t Tell was repealed in 2010, Alva stood on the dais next to President Barack Obama as he signed the order to end it. He continues to speak out on issues that affect the LGBT community.

After receiving the OutServe-SLDN award, Alva said in a statement, “I want to take this time and say ‘thank you’ to the board and its members of OutServe -SLDN for this beautiful award that was bestowed upon me last night in Washington DC. The biggest honor that came while receiving this award was getting it with Paula, Grethe, Aaron and Tom. They were the four other inductees. Their stories alone have paved the way for where we are today in the U.S. Armed Forces, as well as many of others. Thank you for everything. I was proud of to share the stage with these four amazing individuals.”

Updated: October 19, 2016 With the eighth season of RuPaul’s Drag Race now in the books, Rey Lopez Entertainment is...