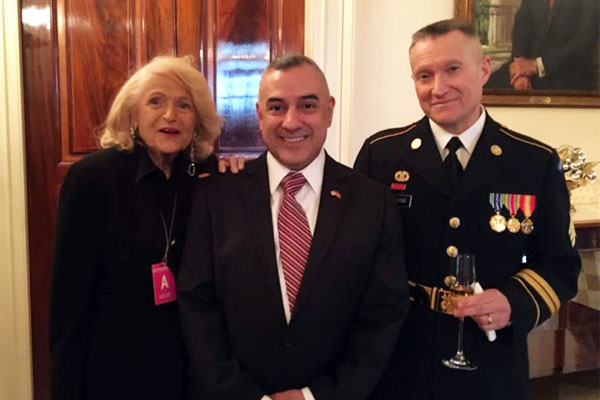 In a ceremony on September 21 at the Bexar County Courthouse, retired Marine Staff Sergeant Eric Fidelis Alva married David Daniel (Danny) Ingram, an Army veteran and former technical analyst at the Georgia Institute of Technology. The couple was married by Judge Genie Wright with a small group of friends and family present to witness the ceremony.

The wedding, which was held in a courtroom borrowed by the judge for a few minutes, came as a surprise to many who know the couple.

In March 2003, Alva was the first service member injured in the Iraq War when he stepped on a land mine resulting in the loss of his right leg and part of an index finger. Two years later, he became a spokesperson for the Human Rights Campaign, spearheading their campaign against the military’s Don’t Ask, Don’t Tell policy. When that law was repealed in 2010, Alva stood on the dais next to President Barack Obama as he signed the order to end it.

Alva currently works as a lecturer at the University of Texas at San Antonio in the Department of Social Work and travels around the country as a public speaker. Eric Alva and Danny Ingram were married by Judge Genie Wright on September 21. (Photo by Katherine Woods via Facebook)

Ingram served six years in the U.S. Army where he achieved the rank of sergeant. In 1992, he became one of the first soldiers to be discharged from the military under Don’t Ask Don’t Tell after he made a public statement in support of then-President Bill Clinton’s promise to lift the ban on LGBT service members. Sixteen years later he was invited by the Obama White House to attend the signing ceremony that repealed the law.

Alva and Ingram first met in 2010 at Veteran’s Lobby Day in Washington DC and in 2014 started a long distance relationship while Ingram was still living in Georgia. Ingram moved to San Antonio in 2016.

In a post on Facebook, Ingram wrote that even though all the couple’s friends and family could not attend the ceremony, the courtroom was filled with the spirit of everyone who fought to make marriage equality a reality.

“No one more deserved this moment than Staff Sergeant Eric Alva, USMC, who fought, who sacrificed, and so compelled the argument for equality,” Ingram wrote. “Everyone who ever dreamed of freedom and equality packed that small room today.”

Upon entering the workroom on season nine of RuPaul's Drag Race, Shea Couleé fiercely declared, "I didn't come to play,...