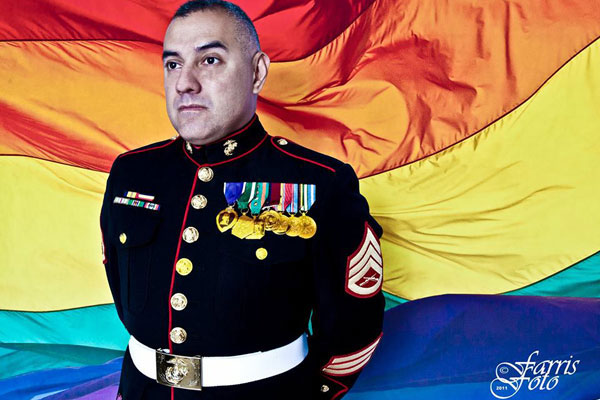 Eric Alva has been named an honorary co-chair of the Equality March for Unity and Pride which will take place in Washington DC on June 11. (Photo by Lauryn Farris)

Retired Marine Sergeant Eric Alva from San Antonio is among several distinguished trailblazers who have been named honorary co-chairs of the Equality March for Unity and Pride which is scheduled for June 11 in Washington, DC.

In a statement to Out In SA Alva said, “At a time in our country when we still have our rights and freedoms threaten by individuals, groups and organizations who want to own ‘our happiness,’ I am truly honored and blessed to be named an honorary co-chair for this historic March for Equality in our Nation’s Capitol. As a gay man, Hispanic, disabled and a US Veteran; I am the face of America and people like me and millions of others who deserve to be treated equally.” The march is a collaboration between the DC Pride Festival and the organizers of the Equality March who say they “want to want to build off the momentum the strong women in the US and around the world started on January 21st. They set the tone with their leadership and it is our intention as a community to follow their lead and play our part.”

March planners also want to shed light on the “current political landscape” and how it’s contributing to the persecution and discrimination of LGBT individuals.

The Equality March begins near the White House and ends at the National Mall. Sister marches are slated to take place on the same day across the world and in over 80 U.S. cities including Austin, Dallas, Ft. Worth, and Texarkana.

One Marine’s march toward LGBT advocacy

Alva’s march toward becoming an advocate for LGBT rights began in March 2003, when he became the first soldier injured in the Iraq War after he stepped on a land mine resulting in the loss of his right leg and part of an index finger. Two years later, he contacted HRC and asked to be involved in their campaign to repeal the military’s Don’t Ask, Don’t Tell policy.

On February 28, 2007, Alva stood alongside Rep. Martin Meehan (D-Mass.) when the congressman introduced a bill to repeal Don’t Ask, Don’t Tell. On July 23, 2008 Alva testified before Congress. His testimony was republished as an essay in the Huffington Post.

In the summer of 2009, Alva joined U.S. Representative Patrick Murphy (D-PA), representatives from HRC and Servicemembers United to launch Voices of Honor: A Generation Under Don’t Ask, Don’t Tell. The national tour highlighted how the policy hurt military readiness and national security while putting American soldiers fighting overseas at risk.

When Don’t Ask, Don’t Tell was repealed in 2010, Alva stood on the dais next to President Barack Obama as he signed the order to end it. In October 2015, the San Antonio chapter of the Human Rights Campaign honored Alva with the Chuck Jordan Award for lifetime advocacy.

The Rainbow Lounge, a gay bar in Ft. Worth, Texas that was at the center of an infamous incident of...