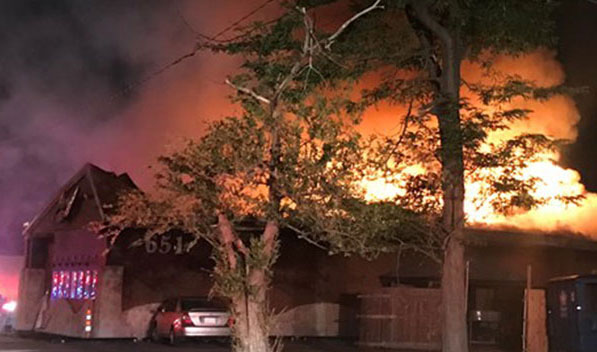 The Rainbow Lounge, a gay bar in Ft. Worth, Texas that was at the center of an infamous incident of anti-LGBT police brutality eight years ago, burned to the ground during the early morning hours of Thursday, June 1.

Media reports indicate the fire broke out around 3 a.m. when bar staff was closing the club. It is believed an electrical problem with a rooftop air conditioning unit or an ice machine was the source of the blaze. No injuries were reported.

The roof of the building collapsed soon after firemen arrived. The structure is considered a complete loss. According to a post on Twitter, the property owner who leases the building said he will not rebuild but demolish and sell the property.

An incident of anti-LGBT police brutality

On June 28, 2009, on the 40th anniversary of the Stonewall Riots, the Rainbow Lounge made headlines when Fort Worth police and Texas Alcoholic Beverage Commission agents raided the bar, arresting several for public intoxication.

Bar patrons said that officers used excessive force during the raid. One of those who was arrested, Chad Gibson, received a severe head and brain injury while in custody. News of the incident spread on social media and became an international story within hours.

Outrage in the LGBT community over the raid led to a picket on the steps of the Tarrant County Courthouse, a candlelight vigil in front of the club and numerous other protests.

Two TABC agents and a supervisor lost their jobs and three Fort Worth police officers were suspended after the incident. The TABC and City of Fort Worth also paid more than $600,000 to the victims to settle lawsuits.

In the aftermath of the scandal, the city created a diversity task force and began diversity training for city employees. The FWPD changed its policy on how it handled bar visits and created an LGBT liaison to the community.

A TABC investigation exonerated TABC officers from charges they had targeted the club because it was an LGBT business and had used unnecessary force. However, the the agency created five community liaisons who would “be tasked with reaching out to diverse community groups including GLBT organizations as well as associations representing racial, ethnic and religious minorities.”

In 2002, documentary filmmaker Robert L. Camina from San Antonio premiered his feature, “Raid of the Rainbow Lounge,” which chronicled the aftermath of the incident.

Who Do You Want to be Mayor? Early Voting Starts Today!