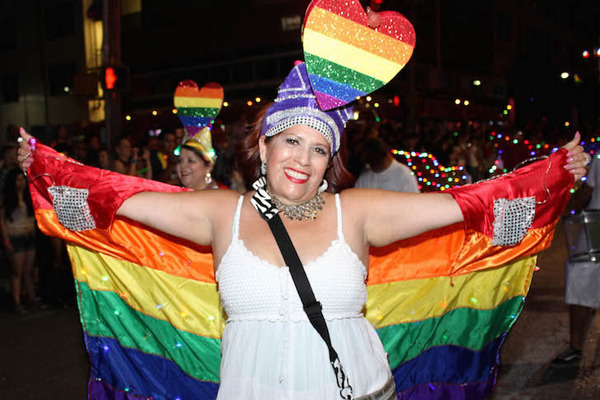 Organizers and volunteers at Pride San Antonio are busy putting the final touches on the full day of events which constitute the Pride Bigger Than Texas Festival and Parade, slated for July 1 along the Main Avenue Strip. This year’s theme is “Living Now – Forever Proud.”

The parade and festival are part of a year-round roster of events which Pride SA organizes. These include a softball tournament, a bowling tournament, a Halloween 5k run, a film festival and an annual shuttle service to Fiesta San Antonio’s Night in Old San Antonio. The festival, which is held in Crockett Park, opens its doors at 11 a.m. and closes at 7 p.m. As usual, there will be booths sponsored by local LGBT businesses and organizations, and plenty of food and drinks. Admission to the festival grounds is $10.

Festival entertainment will feature a few rounds of Pride Championship Wrestling and appearances by the “Wonder Woman” of drag Kelli Kline of Oil Can Harry’s in Austin, the Selena tribute band Bidi Bidi Banda, and drag star Peppermint from the ninth season of RuPaul’s Drag Race. (See videos below.)

The entertainment stage for the Pride festival will feature performers and bands throughout the day. At 3:00 p.m. Bidi Bidi Banda, the Selena tribute band from Austin, will perform. Peppermint is slated the stage between 4 and 4:30 p.m.

Festival-goers will also play witness to a mass wedding to be officiated by a local judge. Those wishing to tie the knot and make it legal on the day of the event must have previously secured their marriage licenses by June 28. North Main Street will serve as a track for two short races prior to the parade. The first, the Rainbow Dash Family Fun Run begins at 8 p.m. The second, the Krystal Kelly Running of the Queens High Heel Race, begins at 8:45. Those wishing to participate in these races should contact Pride SA at this link. The biggest parade yet

This year’s Pride parade promises to be one of the biggest yet with over 125 entries registered to participate. The parade steps off at 9 p.m. at 1812 N Main Ave and continues south to Lexington Avenue where it ends.

Grand Marshals for the parade are Mayor Ron Nirenberg and trans youth activists Joe Maldonado of New Jersey, and 18-year old Mack Beggs of Euless, Texas. The Celebrity Grand Marshal is Peppermint, the singer and drag queen who came in runner-up in the ninth season of RuPaul’s Drag Race.

After the parade, the community is invited to the Pride on the Strip Official After Party at Heat Nightclub.

For more information about all Pride events, refer to Pride San Antonio’s Facebook page. Check out our slideshows of the 2016 Pride Bigger Than Texas Festival and Parade.

While the defeat of Mayor Ivy R. Taylor by Councilman Ron Nirenberg in the runoff election has been widely cheered...