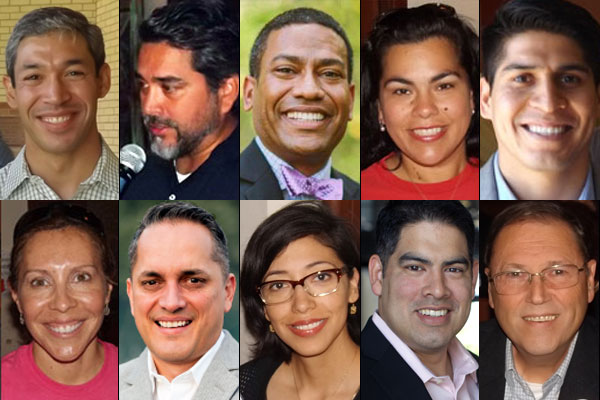 While the defeat of Mayor Ivy R. Taylor by Councilman Ron Nirenberg in the runoff election has been widely cheered by San Antonio’s LGBT voters, there are other reasons for celebration considering the majority of City Council seats will be occupied by allies of the community.

In a speech to LGBT supporters on May 21, then-mayoral-candidate Nirenberg said, “We deserve a city that treats everyone fairly whether you’re transgender, bisexual, lesbian, gay or straight or whatever your definition, you deserve to be treated fairly by your city government.”

Now that the election has passed, Nirenberg’s comments will help set the tone for what local pundits have called the most progressive City Council in San Antonio history.

Villagran, Saldaña and Gonzales all supported the nondiscrimination ordinance when it was enacted in 2013. All three have consistently sought the endorsement of the Stonewall Democrats of San Antonio and are seen as longtime friends to the LGBT community.

Treviño, who was not in office when the NDO passed, has expressed support for the measure. He also has advocated adding staff to the Diversity and Inclusion Office, creating an LGBT senior center and installing a rainbow crosswalk on the Main Avenue Strip. This year, he will participate for the third time in the Pride San Antonio parade.

New on the council

Sandoval, Pelaez and Courage all sought and received the endorsement of the Stonewall Democrats.

In her comments on Stonewall Democrats questionnaire, Sandoval said, “I believe that members of the LGBT community are members of the broader community that we all belong to and that we should all be treated with the same dignity and respect that all human beings deserve.” She supports increased funding for the Diversity and Inclusion Office and would like to create support services for transgender citizens who are seeking employment.

Pelaez told Stonewall that while he “agrees with the intended goal” of a city-wide employment nondiscrimination ordinance, he believes an such a measure would be difficult for city staff to enforce. “I would push for San Antonio to incentivize businesses to adopt LGBT protections,” he said. “There are plenty of examples of community-wide initiatives that succeed because of incentives instead of punitive measures. I have experience with efforts such as these and am willing to help lead such an effort.”

Courage has been more circumspect in his public comments regarding LGBT issues since, as a Democrat, he was elected in what is considered the most conservative district in the city. Nonetheless, Courage told the Stonewall Democrats he supported all their issues including the NDO.

Shaw did not seek the Stonewall endorsement but his campaign website included a statement that said, “While the 2013 expansion of the NDO and the creation of the office of Diversity and Inclusion were a positive first step in extending protective status to vulnerable groups, the city still has work to be done to ensure the protection of basic rights for all of its residents.” The statement goes on to support a city-wide employment nondiscrimination ordinance. Shaw recently accepted an invitation from the Stonewall Democrats to speak at their next meeting on June 19.

Councilman-elect Brockhouse is a political consultant and fiscal conservative best known for his opposition to the now defunct streetcar project, the charter amendment that established salaries for City Council members and the SAWS rate hike. He has also served as a representative for local public safety unions. He previously ran for the District 6 seat in 2013.

Not much has been known about Brockhouse’s stance on the nondiscrimination ordinance and other local LGBT issues. He received endorsements from several conservative organizations which are opposed to the NDO.

On June 13, Brockhouse approached Chris Forbrich, co-chair of the Stonewall Democrats, and told him he never received the Stonewall candidate questionnaire and as a consequence missed the group’s endorsement forum. Forbrich told Out In SA that Brockhouse said he supported the NDO and is opposed to the bathroom bill being considered in the Texas Legislature.

Brockhouse told Forbrich he wanted to speak directly to the LGBT community. As a result of that conversation, Brockhouse accepted an invitation to speak at the next meeting of the Stonewall Democrats on June 19. Perry is a retired Air Force engineer who did not seek endorsement of the Stonewall Democrats. Public safety and infrastructure are his signature issues.

Salt and Light, a conservative Christian website, reports Perry said in a questionnaire that nondiscrimination ordinances are an issue for the state government and therefore had no comment on the local measure.

Speaking Out: Comedian Joan Riviera Emerges as a Trans Activist

“I am your mother! I am your sister! I am whatever you want!” On a recent evening at Main Plaza,...