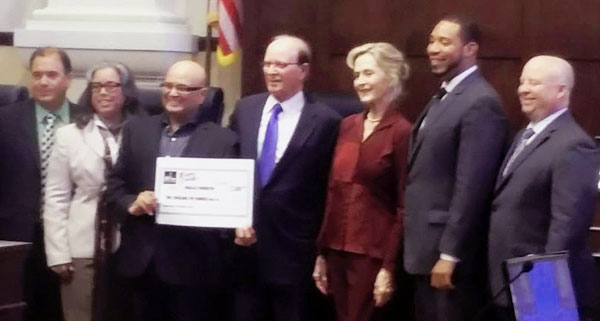 Greg Hinojosa, one of the organizers of Fiesta Frenzy, along with attorney Rosie Gonzalez, were on hand June 2 at the presentation of a check for $2,500 to help provide upgrades to the Children’s Room at the Bexar County Courthouse.

The Children’s Room is a waiting area for kids who must make court appearances in domestic disputes. The space is stocked with toys and games which the children can play with while they wait. However, over the years, the room has shown a bit of wear and a lot of the toys and games were broken or had missing parts.

The initial push to raise funds for the room was started by Gonzalez, who has a family law practice.

“For my 50th birthday, I placed a shout-out on Facebook asking for donations to be made to the Children’s Room,” says Gonzalez. “The campaign was pretty successful . . . My daily requests got the attention of Greg Hinojosa and his partner [Daniel Acosta].”

Hinojosa and Acosta are the producers of the annual Fiesta Frenzy, a drag and variety show that this year marked its 16th anniversary as a fundraiser for various San Antonio charities. When they heard that Gonzalez was reaching out to the community to help the Children’s Room, the couple decided to make it the beneficiary of this year’s show.

Along with monetary donations derived from ticket sales, Fiesta Frenzy asked audience members to bring a toy or stuffed animal in exchange for a pair of tickets to any show at the Woodlawn Theater where Fiesta Frenzy is performed.

The check was presented during a meeting of the Commissioners Court to Tracy Wolff, president of the Hildalgo Foundation of Bexar County and wife of County Judge Nelson Wolff.

The Hidalgo Foundation is a non-profit organization, formed in 2001 by Tracy Wolff, that operates “exclusively for the charitable, literary, historical, and educational purpose for the sole benefit of Bexar County, Texas.”

According to information on the foundation’s web site, the initial goal of the nonprofit was to preserve and renovate the old historic courthouse, which is well over 100 years-old and is said to be the longest operating courthouse building in Texas.

Most recently the foundation raised $6 million to renovate 11 historic courtrooms and to reconstruct and relocate the Child Abuse and Neglect courtroom.

“Fiesta Frenzy continues to reach out to the San Antonio community,” Hinojosa told Out In SA. “This year, with the gracious cooperation of the historic Woodlawn Theatre, we were able to donate $2,500 to the Hidalgo Foundation with funds to help support the refurbishment of the Children’s Room.”

“In other countries, the reference to James Byrd is kind of lost, but the violence is very much there and...