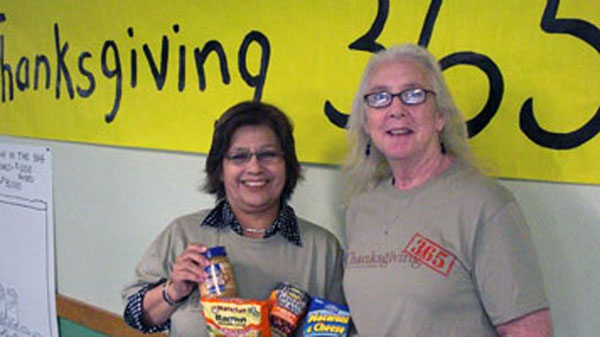 “Patti has a pure heart and is a tireless advocate for her area of town,” Guajardo told Out in SA. “She and her husband Rod run the nonprofit Inner City Development that serves one of the poorest neighborhoods in San Antonio. The money raised will help the agency’s emergency food bank.”

Inner City Development has provided food and basic life support to the West Side of San Antonio for over 40 years.

The fundraising drive is called Thanksgiving 365. The philosophy is that Thanksgiving brings out the best in people and serves as a reminder that many are hungry in our city.

A group of fundraisers, including Guajardo, began fasting on November 5 as part of the campaign. Each of these fundraisers has committed to raising $1000 each. Each participant’s fast ends on Thanksgiving or when they’ve raised their goal.

According to the Inner City website, people from across San Antonio are participating in the fast, including community leaders, media personalities, and regular folk, all working together to help reduce hunger for families in need.

This year, Inner City Development is hoping to raise the $30,000 it needs to keep the emergency food pantry stocked for a year with the basics to feed the hundreds of families who come for services each year. Inner City is projected to serve over 70,000 meals this year to families who are in crisis.

“We are concerned that demand at the emergency food pantry will increase, given the cuts to the Supplemental Nutrition Assistance Program,” says Radle.

“I’ve joined as a sponsor because I know that our community is ready and able to help this cause,” says Guajardo. “I am asking people to give $25 or an amount they are most comfortable giving. I will be fasting till I raise the full amount, and you know by looking at me that I have don’t like missing many meals.”

“Thanksgiving 365 is an effort to keep Inner City Development’s food pantry stocked all year round and to raise the consciousness that hunger is not a Thanksgiving issue, but an issue all year round,” says Radle.

To help with Elena Guajardo’s Thanksgiving 365 goal, make your check payable to Inner City Development and mail by November 22 to: Inner City Development, ℅ Patti and Rod Radle, 1300 Chihuahua St., San Antonio, TX 78207. Please add a line on the outside of envelope and on the check that says “Team Elena.”

An evening with Rebecca Solnit, mansplaining and more