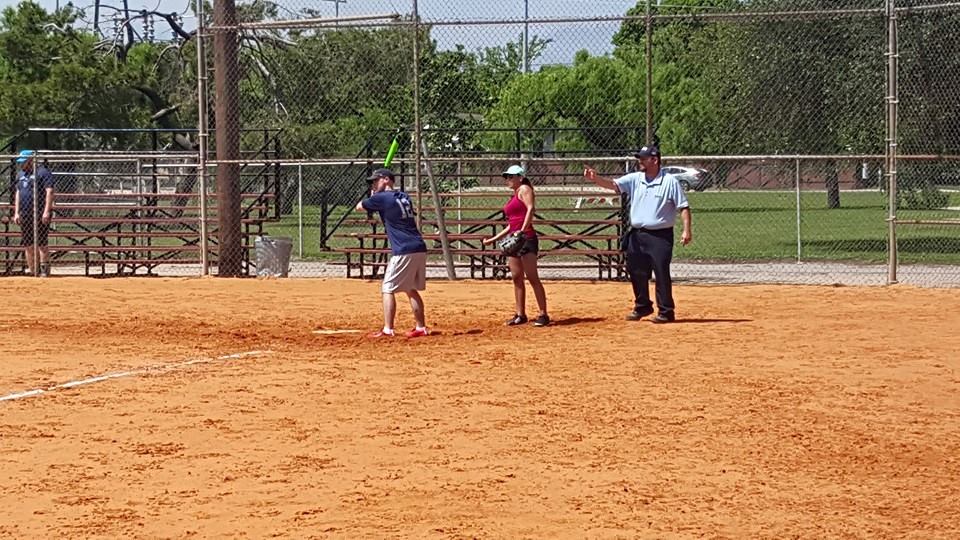 Justin Woods of Diamond Dads prepares to swing on opening day of spring 2015.

Cory Elias has lived in San Antonio her whole life and had always wondered why San Antonio did not have a gay softball league. Cities across America, which are much smaller than San Antonio, play gay softball. In Texas alone, Austin, Dallas, and Houston have long had thriving gay softball leagues, each with dozens of teams. Elias played on several co-ed softball leagues in San Antonio, which, she recalls, tended to be fueled by hyper-competitiveness, but she missed the sense of community that she longed for in a sports league. In 2015, Elias and many other San Antonio LGBT community members were elated to discover through word-of-mouth and online advertising that Pride San Antonio would be organizing San Antonio’s first gay softball league, starting in March, 2015. After completing its first successful Spring season, and due to popular demand, gay softball is returning to San Antonio for a fall season, beginning September 20. (New players are welcome to join online (pridesanantonio.org/gay-softball-league) until the deadline, September 9.)

Justin Woods of Diamond Dads prepares to swing on opening day of spring 2015.

In a society that interacts increasingly online with little face-to-face community building, athletics is often the first place many people turn to interact on a more personal level and to have fun. Yet LGBT people often have mixed experiences playing sports in a culture of homophobia on athletic teams. Recent articles in The New York Times have suggested that playing fields can be the most difficult place for one to come out as openly gay. The need for LGBT sports has long been palpable. When LGBT people move to a new city, or when native denizens look to rekindle an interest in sports, “gay softball” is one of the more common phrases one enters into Google to try to meet other community members.

San Antonio has long been home to other LGBT sports leagues, most notably the Diablos Gay Flag Football League (SAGFFL), some of whose team members also play gay softball, but also gay bowling, kickball, and volleyball. But gay softball in San Antonio is only a few months old. In 2008, Pride San Antonio began a softball tournament that occurred during the months of May and June leading up to the Pride festivities. Each summer anywhere from four to seven spirited teams played. For several years there had been talk among LGBT San Antonians about expanding to a softball league, but it was not until almost two years ago, when Eric Sedwick, a gay-softball aficionado, who had moved from Austin to San Antonio, attended a Pride San Antonio meeting and saw the need for gay softball in San Antonio, that much of the planning for a league similar to Austin’s began.

The first season of gay softball began in March 2015 with six teams of at least 10 players: Diamond Dads, Brokebat Mountain, Where My Pitches At, Looking to Score, All About the Base, and Help Wanted. Some teams were comprised of men only, and others were co-ed, a distribution based solely on what kinds of teams managers were able to put together. Gay softball was played on Sunday mornings at the Rusty Lyons fields (at Basse and McCullough) over the course of three months; players navigated several administrative snafus and rain cancellations, but thrived as a league. Diamond Dads, an all-male team, emerged the victor of the season with the most wins.

Elias enjoyed the league most of all for the community building. In the spring she was placed randomly on a team none of whose players she had ever met. She nonetheless had a fantastic time, making new friends and even a girlfriend in the process. Elias says, “It’s a place where we can bridge gaps between lesbians and gay men bringing them together to play a sport they all love. I think through time there has been this fear or anger toward other parts of the LGBT community outside of one’s own clique. This league gives everyone an opportunity to interact with other parts of the community with which they would not otherwise normally interact. It builds relationships on and off the field that move us in a positive direction.” Gay softball is also an opportunity to build community between the LGBT and straight worlds. Many straight men and women play gay softball, and are welcome to join the fall league. Players of all skill levels played in the spring and are expected to in the fall. On any given team there might be one man who can hit it over the fence and another who can barely hit the ball but gives it 110 percent and finds himself supported by his teammates every step of the way. Santiago Pedraza, a member of spring’s Diamond Dads, who played Dallas Gay Softball for 17 years, and was recently the inaugural winner of the 2015 San Antonio Gay Softball League’s Carol Guevara Player Spirit of the Game Award, likewise sees gay softball as a chance to be competitive and build community, noting, “It is always exciting for me to see new players grow and improve as the season goes on. I saw that with the team I was a part of in the spring. We had several beginners or players who had not played in years, and it was fun to watch them improve as they played. LGBT athletics is a great way to be physically active and be a part of a social group. It helps to give us a sense of belonging and acceptance into athletics and our own community.”

The spring season generated enough excitement to include a fall season in the year. But before the fall season could begin, it was agreed that administrative changes were needed. The league had gone through several commissioners in just one season and needed more stability. James Poindexter, secretary of Pride San Antonio, proposed an executive board comprised of six spring players, including two co-commissioners, currently Elias and Jose Hernandez. The board has been busy over the summer concentrating mostly on how to advertise and grow the league. Hernandez stated that the board’s goal is to grow to at least 10 teams in the fall. The executive board also has hopes of soon joining the North American Gay Amateur Athletic Alliance (NAGAAA), membership with which offers more codified rules of play and the eligibility to play in the Gay Softball World Series, hosted in a different city each year. The board also hopes to attract enough players to separate teams into divisions based on the skill level of the players, and to warrant upgrading to larger playing facilities. Meanwhile, teams have been hard at practice. AJ Cintron, co-manager of Where My Pitches At, has 20 players signed up, and has secured as her team’s coach Homer Flores, who has played baseball from age 5 to 54 with a tremendous amount of playing and coaching experience and accolades for both baseball and softball. On August 30, San Antonio Gay Softball hosted a players’ clinic and registration day for new and returning players; turnout and enthusiasm were high.

The executive board also hopes to continue developing relationships with San Antonio businesses. Each team must pay a $290 fee (which covers the cost of reserving fields), a fee that was paid by various business sponsors in spring 2015, including the league sponsor, Bud Light, as well as team sponsors New Heights Dental, SA Country, Crazy J’s Sports Bar, Pegasus, and Astro Bowl; fall sponsors declared thus far include Crazy J’s, Roman Arms Gun Company, Tryst Rituals Salon, and The Midnight Bakehouse. Also, Club Essence and Luby’s on Main have provided a venue for many of the league’s meetings and activities.

The fall season is fast approaching. The deadline for players to register is only a few days away, and both Pride San Antonio, and the Gay Softball Executive Board encourage all San Antonio community members—LGBT and straight, men and women of all ages (at least 17 years old) and of all skill levels—to join for an exciting opportunity to build community and to have fun playing softball. Games will once again take place on Sunday mornings (extending into the afternoon) at Rusty Lyons fields. The season runs from September 20 to November 8, with playoff tournaments to follow. The individual registration fee is $35. More information can be found at pridesanantonio.org, and questions can be emailed to [email protected]. Elias, Hernandez, Pedraza, and Cintron, all members of the Executive Board, all agree that the excitement level for the fall season is high, but they continue to spread the word about San Antonio Gay Softball, encouraging all interested members of the community to sign up. Hernandez, who commuted to Austin to play gay softball for several years, while San Antonio had no league, says, “Don’t be afraid to step up to the plate and swing. Only as a community and city can we make this league grow and succeed.”

Bexar County Clerk Gerry Rickhoff could have just said he was prepared to follow the Supreme Court’s ruling. He’s a...