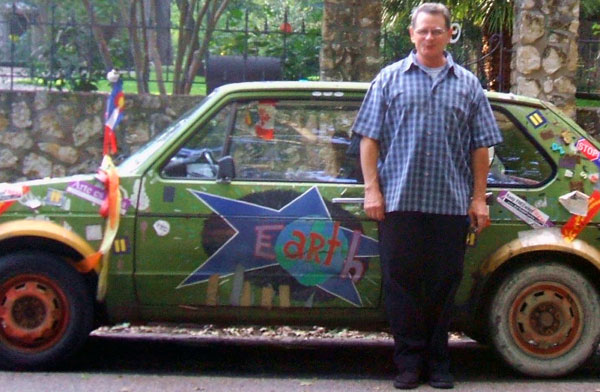 Gene Elder, the Archives Director of the HAPPY Foundation, muses on what happens when the unmovable (religious fundamentalism) meets the unstoppable (the LGBT movement). (Photo by Sam Sanchez)

Gene Elder’s June Pride Deep Thoughts from the HAPPY Foundation (Dog-gone-it! Because people like me.)

1) What happens when the unmovable meets the unstoppable? I predict it’s not a pretty picture. That is how I view the conflict between the religious fundamentalists and the GayBLT community. The rest of us are in the path of a huge explosion. For the past 32 years (at least)–1973 was when the American Psychiatric Association determined that homosexuality was not a mental illness–we have all been on the edge of our seats waiting to see how the story line would miraculously change into something else altogether. First it was just letting guys dance with guys and women dance with women. Throw in a little cross-dressing and kissing. We thought that was liberation.

2)  Gay Christians???? How did they get in here? I will tell you how. Over the years I asked many gay men and women about their religion background. And they revealed they had been raised as Baptists, Jews, Catholics, Methodists (me), Presbyterian, Protestant, Muslim, Jehovah’s Witness, Lutheran, Holly Rollers, Unitarian, etc. They came from every religion. And the gay atheists were the most fun because they had studied and understood the Bible better than the fundamentalists because they had to always argue the finer points.

3) So much for the unstoppable. What about the unmovable?

Well, first off we are all part of GOD’s creation and we are all GOD’s children so the religious fundamentalists (and this includes, Jews, Muslims as well as Christians) are no closer to the Divine Spark than the gay community. This is their first mistake. Because we in the GayBLT liberation civil rights movement know what GOD has demanded of us: That we stand up and tell the truth about who we are. So all this concern from the Bible beaters is not going to bring them the victory they think. So what next?

4) Well, what if, just what if this Unstoppable vs. Unmovable turns into that famous transforming scene from the Stanley Kubrick film 2001 when the ape throws up the bone and it goes up and up and up and the next thing we know we are in a more intelligent space and the beautiful Blue Danube Waltz is playing and we know that man finally made it.

6) Fundamentalists come in all sizes. And I must state that I find many gay men to be just as narrow-minded and as hateful as they view religious fundamentalists. And I tell them so. Which does no good because I must be the one who is wrong, obviously. One thing I have learned as the history archivist of the GayBLT community in San Antonio is to look at everything and collect everything. I keep a file on the gay Republicans and the gay Democrats. And I look at both sides of the debate. It is possible for a person to hold and understand two opposing thoughts at the same time. The mind is a really big place.

7)  As an artist I find a lot of inspiration in the Bible and I listen to what fundamentalists use to denounce same sex relationships. I use this one: Genesis 1:1. This is where GOD tells us who he is. He is an artist. And with this understanding comes the knowledge that He understands his artists and what we are all up to. And that message in Genesis 1:1 trumps all others in the Bible.

8) The other day I found a LIFE magazine in a stack at Boysville Thrift Shop, February 23, 1962. I purchased it because Shirley MacLaine was on the cover and much to my joy after buying it, I discovered that it contained the article about the then-released movie The Children’s Hour with MacLaine and Audrey Hepburn. A controversial topic taken from Lillian Hellman’s distinguished drama. It’s about a lie. A lie a child told that becomes a monstrous rumor. It results in a tragic end. San Antonio had this happen with a child’s lie that has become the true story of what is now called The San Antonio Four.

9) So what about all this? What about this new San Antonio goal of getting our 5 missions on the UNESCO list? It would be wise of us to start acting like a city that has learned something from these missions. That is what San Antonio should give to the rest of the world. People like to visit places that are known for their peace and harmony, that are spiritually uplifting and have learned the lessons from their past. The Texas Revolution generation left us with their quote and we use it all the time, “Remember the Alamo.” What do you think the heroes of the Alamo would want us to remember? Remembering can refer to many things in history and there is a lot to remember. “Remember the Alamo” is not just a call to arms. Oh No! It is a lesson. A lesson about peace and how to avoid the same mistakes.

10) I think the problem with the unmovable and the unstoppable is that they both are ill-mannered in their unforgiving. Maybe that is the history we should remember.

Gene Elder is the Archives Director of the HAPPY Foundation, the San Antonio GayBLT history archives (next to the Alamo). [email protected]

Activists from San Antonio are representing the city's LGBT community at political campaign training provided this summer by the Gay...