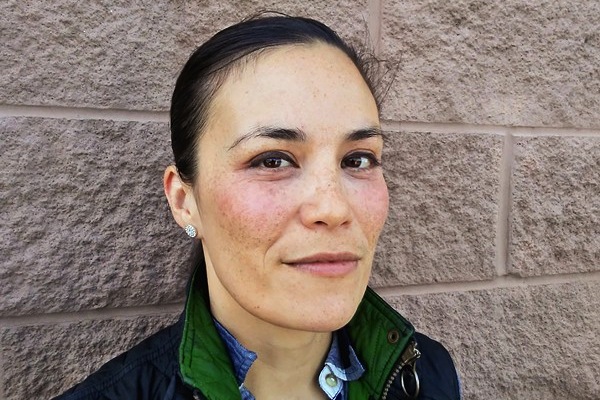 Democratic nominee Gina Ortiz Jones hasn’t been elected to serve the people of Texas’ 23rd Congressional District. Even so, the COVID-19 crisis has inspired her to open a virtual field office to help residents connect to health care and financial resources.

“We are stepping up and, in many ways, serving as a congressional office would,” she explains via phone.

For those who have observed Jones’ solution-driven mindset during her time running for office, the decision to provide weekly updates on COVID-19 may not come as much surprise. The candidate firmly believes that leadership is actionable.

During her 2018 bid to represent the sprawling border district, Jones, now 39, was pegged by her party’s far-left wing as a Washington insider and an establishment figure. After winning that year’s runoff against Democratic Socialist Rick Trevino, she secured the nomination and went on to challenge Republican incumbent Will Hurd, who ultimately defeated her by a razor-thin margin of 926 votes.

Looking back, Jones’ campaign didn’t have the messianic feel of Beto O’Rourke’s 2018 run for the U.S. Senate. Nonetheless, the attractive and smart Jones was elevated by a rarely seen lesbian star power that inspired her backers to view her as the year’s Great Gay Hope.

The fact that she came so close to defeating Hurd fueled her second bid, boosting her enthusiastic base beyond the LGBTQ community and onto a higher tier of electability.

“I can’t believe that it’s already been two years. You have no idea how much I want to be at Taqueria El Rodeo right now,” she says, naming the Northwest Side eatery where we first met.

I tell her that I’m holding up two imaginary Gina Ortiz Jones Barbie Dolls, one from 2018 and one from this year. I ask how they’re different.

“Um … let’s see,” she says, playing along. “To be honest, I don’t think they’re going to be too different. They are motivated by the same things, making sure that the community is well represented. Frankly, I think the Barbie Doll of 2020 would be living through COVID-19.”

That latter premise weighs over everything right now and certainly puts up a “Winding Road” sign en route to November’s election.

Jones says White House officials were warned of the oncoming coronavirus pandemic but chose not to act. “No one could have imagined that we could be living through this,” she says. “Unfortunately, much of this is needless.”

I ask her when she thinks the country will be over the worst of the pandemic.
“I’m not a doctor,” she says. “I’m just the one that listens.”

And listen she does. Jones invites Texas’ brightest minds to appear on her weekly town halls, which she posts on her Facebook page, along with Spanish captions.

I compliment her on the wide variety of experts she’s already interviewed. “Well, I don’t know what I don’t know,” she replies. “I’ve always said, ‘If I’m the smartest person in the room, there’s a problem.’ I think part of being a good leader, Jade, is recognizing that one doesn’t have all the answers. I mean, who does? Nobody does.”

Nine months ago, a photo of Jones standing at a memorial dedicated to the victims of last year’s mass shooting at an El Paso Walmart popped up in my Facebook feed. It struck me as a significant milestone in her journey as a Texas leader.

When I ask how the tragedy affected her personally, she pauses, seeming to flip back a few news cycles.

“It was heart-wrenching to think that anybody in our country would be targeted simply because of the color of their skin,” she says. “And it was equally heart wrenching to think that that killer was motivated by the words of our country’s leader. First, I felt I needed to call it what it was, which was a white nationalist-fueled domestic terrorist attack that caused the largest massacre of Latinos in American history.”

She continues: “It showed all of us just how dangerous this type of rhetoric can be if left unchecked. And that’s why I’ve always said, it’s not just what our leaders do, it’s also what they don’t do. It’s also the silence of so many and then the complicity of so many that are also responsible for that tragedy and continue to be responsible, unfortunately, for what’s going on today. That was another unfortunate and needless event. It shouldn’t have happened, and we know it doesn’t have to be that way.”

I ask if there’s anything she would praise about Hurd’s administration?

“Praise?” she replies slowly, as if pulling the word out of a muddy pond. I immediately wish I’d used a less celebratory term.

“In all fairness, I have heard in local communities that he has a good staff and they are responsive,” she acquiesces. “That’s a low freakin’ bar, right? If you’re praising somebody because their staff answers the phone and gets back with somebody? That just shows you just how low our expectations are.”

With her eye on the future, Jones says she would like people who attend her town halls to ask a question: “What is the world that you want after this?”

“I think people are dealing with the economic consequences and the health consequences [of COVID-19] in their own way,” she says. “I’m not going to tell anybody how they should feel about this, but people are going to walk away with their own understanding of what this has meant to them personally and what that could mean to them as they decide who their next leader should be — and they have every right to do that.”

I ask her if there’s something she’d like people to keep in mind as we continue down this path of so many unknowns.

“I think we are a resilient people,” she says. “We’ll get through this. [But] I think we’ve absolutely learned our lesson.”

San Antonio Police have identified 20-year-old Helle Jae O’Regan as the victim of a fatal attack at the Diesel Barbershop...