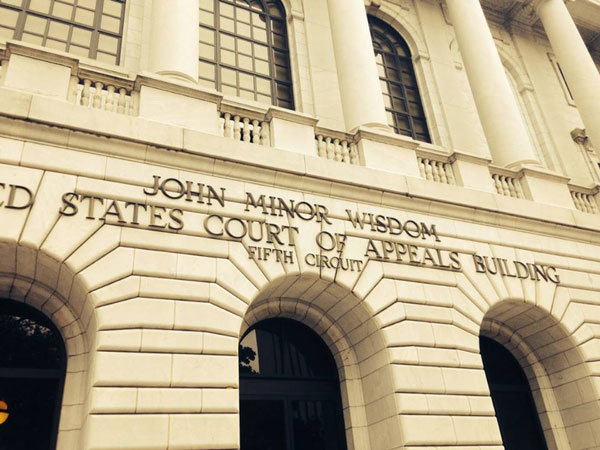 On January 9, the U.S. Court of Appeals for the 5th Circuit will hear the State of Texas' appeal of U.S. District Judge Orlando Garcia's ruling that struck down the state's ban on same-sex marriage.

On January 9, the plaintiffs in the Texas marriage equality lawsuit will head to New Orleans where the U.S. Court of Appeals for the 5th Circuit will hear the state’s appeal of U.S. District Judge Orlando Garcia’s ruling that struck down the state’s ban on same-sex marriage.

The case has reached the 5th Circuit thanks to the determination of the four plaintiffs, Vic Holmes, Mark Pharris, Cleopatra DeLeon and Nicole Dimetman, and their legal team from the San Antonio firm of Akin Gump led by Neel Lane and Barry A. Chasnoff.

Commenting on the upcoming showdown in New Orleans, Pharris wrote on Facebook, “Vic and I look forward to this coming Friday’s hearing before the 5th Circuit when our great lawyers at Akin Gump will make the case for Texas marriage equality — not just for us and our co-plaintiffs, Nicole and Cleopatra, but for all gay and lesbian Texans.”

The two couples will not be alone in New Orleans. Scores of Texas LGBT activists will be joining them to offer support and to vie for the limited seating in the courtroom.

On the night before the hearing, Equality Texas is hosting a Thank You Celebration for “the plaintiffs and legal teams who are working to win marriage in Texas . . .” as well as in Louisiana and Mississippi, whose marriage cases are being considered by the 5th Circuit in separate hearings.

At noon on January 9, the Forum for Equality will host a “press conference and celebration” on the steps of the Fifth Circuit Building.

“The aim is to show gay Americans are really completely integrated into the fabric of our society,” Mark McKinnon, a former advisor to President George W. Bush and Texas chair of Southerners for the Freedom to Marry, told the Houston Chronicle.

McKinnon told the Chronicle the ads were an “electronic blanket” to reinforce a recent wave court cases validating LGBT Americans right to marry in other states.

The commercials are part of Freedom to Marry’s partnership with Equality Texas called “Texas for Marriage,” a $200,000 campaign that includes television ads and town hall meetings to help raise awareness of the appeals court hearing.

On the evening of January 9, Marriage Equality USA will host a national conference call that will feature local and national legal experts discussing what happened in the courtroom not only with the Texas hearing but in the Louisiana and Mississippi hearings as well. The call is at 8 p.m. Central Time and is open to the public. Use this link to RSVP.

Several LGBT groups in San Antonio are planning “a peaceful show of solidarity and support” on January 9 at 5:30 p.m. on the steps of the Bexar County Courthouse. “It is important for us to join together in solidarity to amplify our voices and let the world see our faces, our loved ones, and our families. Bring your signs, your significant others, and your voices,” says Robert Salcido of Equality Texas, one of the event’s organizers.

While many in the community are hoping for a positive outcome, no one is more confident than attorney Neel Lane who told the Texas Observer on January 5 that he feels sure Texas will have marriage equality soon.

Although the 5th Circuit is among the most conservative federal appeals courts in the country, Lane said he’s confident the panel will rule in favor of marriage equality within a few months and that the decision will take effect immediately.

There is no adequate way to document the contributions that Robert Rehm made to the San Antonio theater community, his...