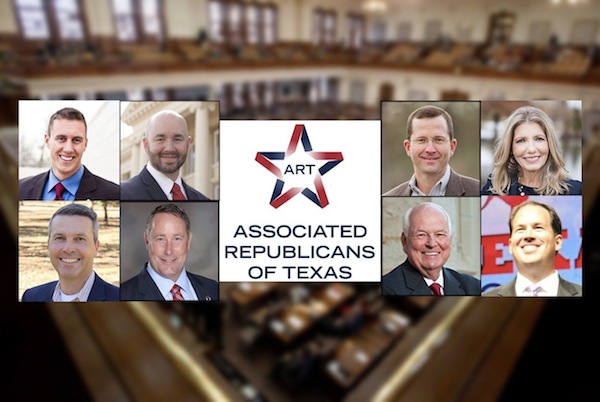 In September, the Texas Capitol was finally starting to calm down.

A couple of contentious legislative sessions had pitted the Legislature’s Republican centrists against hard-line conservatives, largely over measures regulating which restrooms transgender Texans could use. Members had returned to their districts, almost certain the “bathroom bill” would surface as an issue in the 2018 primaries. And House Speaker Joe Straus’ surprise retirement announcement was still weeks away.

For the Associated Republicans of Texas, it was time to go all out.

The group, founded in the 1970s to flip the Legislature red, had built a record defending Republican lawmakers aligned with the moderate wing of the party — but for years had waited to wade into re-election bids until the state’s primaries ended. Now, ART was about to pump an unprecedented amount of its money into GOP primary races for like-minded candidates — and even one challenger to an incumbent — locked in competitive intra-party battles.

“If we waited until after the primary to engage, we were limiting the effectiveness we could have,” Cyndi Taylor Krier, an ART leader and former state senator said. “If you say, ‘Well, I’m just going to wait until November,’ you’re giving them half your vote.”

With its emergence in the GOP primaries, ART is now a significant counter force to Empower Texans, a prominent Tea Party group that’s long thrown its financial weight behind hard-line conservatives running for office. ART’s increased efforts also come ahead of a pivotal vote next year in the Texas House to pick the next speaker — and the elections this year will shape the ideological profile of the lower chamber’s next leader.

So what prompted the group to end decades of tradition and step up its involvement? As Gaylord Hughey Jr., one of ART’s leaders, put it, the catalyst was the “bathroom bill.”

“We felt like we had to engage in the primaries … to invest in candidates of reason,” Hughey, an East Texas oil and gas attorney and a major GOP fundraiser, told The Texas Tribune. “There was a growing concern about the influence of Empower Texans and the ultra-conservative policies that they were pushing, which were not necessarily in the best interest of this state.”

ART has already doled out $2.3 million in advertising, donations, polling and consulting so far this election cycle — about four times the amount it spent on those same items for the 2016 primaries and runoffs, campaign finance reports show. That money has helped moderate Republicans in the House and Senate largely fend off competition from Empower-backed challenges in the March 6 primaries. And it may have a similar effect in Tuesday’s runoffs.

With the March 6 primaries in the rear-view mirror, seven GOP primary races for the state House are set for runoffs. ART is knee-deep in all of them.

And a big chunk of the group’s funding has come from a handful of key supporters — including Straus, who has given the group $350,000 this year. John Nau, a co-chair of ART who’s also a Houston beer distributor and Gov. Greg Abbott’s campaign treasurer, has donated $150,000 to the group since July. And two El Paso businessmen — ART board member Woody Hunt and Paul Foster, vice chairman of the University of Texas System Board of Regents — have also dumped in $450,000 and $250,000 since July, respectively.

The Empower Texans PAC, plump with donations from Midland oilman Tim Dunn, has also dumped tons of money into races this election cycle — around $3.5 million for advertising, donations, polling and consulting.

In another open race, House District 8, ART shelled out around $181,000 in in-kind contributions to Cody Harris, a Palestine businessman who faces Thomas McNutt, whose family owns the Corsicana staple Collin Street Bakery, in the runoff for House District 8. Empower Texans’ PAC has spent over $300,000 on McNutt.

The HD-8 seat is highly coveted for both sides of the party — state Rep. Byron Cook, the retiring Corsicana Republican who has represented the district since 2003, was one of the House leaders most closely tied to the death of bathroom bill legislation.

ART has also spent nearly $125,000 on state Rep. Scott Cosper, a Killeen Republican who’s in a primary runoff in his bid for a second term. Cosper, asked about the help ART has given him this cycle, told the Tribune in April that it was a gesture to show their “appreciation and commitment to bring back a member that represents Texas well.”

The group has also made some last-minute contributions to candidates in the other House GOP runoffs, including Steve Allison, who is running for the San Antonio-based seat Straus is vacating.

“The establishment strikes back”

ART first dabbled in primary politics during the 2016 election cycle — a decision the group in part made, as Krier, one of ART’s leaders recalled, to combat special interest groups within the “far right part of the party” that were funding aggressive campaigns against Republican incumbents.

This cycle, the group had an impressive number of wins on March 6 — but also a couple of sizable losses. State Rep. Cindy Burkett, a Sunnyvale Republican who received almost $180,000 in in-kind contributions this year from ART, came up short in her bid to oust state Sen. Bob Hall, R-Edgewood. Others backed by ART in their re-election bids, such as state Rep. Wayne Faircloth, R-Galveston, and state Sen. Craig Estes, R-Wichita Falls, were defeated by challenges running to their right.

Yet Hughey, the oil and gas attorney, said ART’s efforts this cycle have produced more incoming House members that fit the group’s description of helping elect “reasoned, conservative leadership” to the state Legislature.

“Without the financial resources and other resources that ART provided, the makeup of the Texas Legislature would have been far different than what is likely to be the case come January,” Hughey said. “That, in turn, I think is going to impact who the next speaker is, and we’ll also have a more balanced Legislature as a result of ART’s involvement.”

Disclosure: John Nau, Woody Hunt, Paul Foster, the University of Texas System and Rice University have been financial supporters of The Texas Tribune, a nonprofit, nonpartisan news organization that is funded in part by donations from members, foundations and corporate sponsors. Financial supporters play no role in the Tribune’s journalism. Find a complete list of them here.

Shay Spence, front-woman and bassist for the NYC slacker rock band Vassals, will perform in San Antonio on May 31...