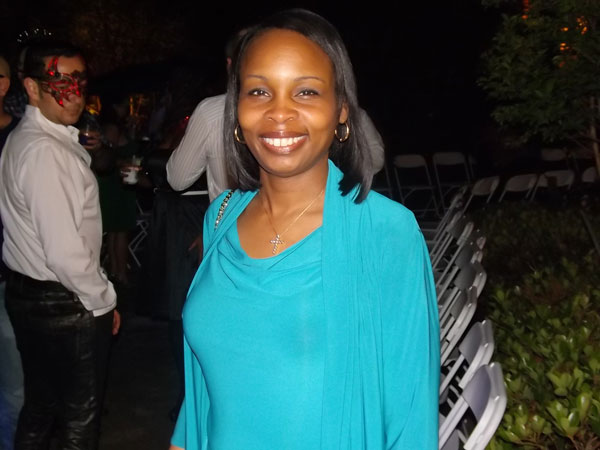 Interim Mayor Ivy Taylor made a surprise appearance at the Fiesta Youth Fundraiser which was being held in Dignowity Hill at the home next to hers. (Photo by Sam Sanchez)

Interim Mayor Ivy R. Taylor paid a neighborly visit to the home of Keith Wichinski and David Willet, her next door neighbors on Dignowity Hill who just coincidentally were hosting a party to raise money for a nonprofit that supports LGBT youth.

The April 11 event, dubbed Midnight in the Garden of Good and Evil, was being held in Wichinski and Willet’s historic mansion which sits adjacent to Dignowity Park.  The beneficiaries of the evening were Fiesta Youth and Fiesta University .

About 6:45, guests arriving for the party could spot Taylor as she exited her home next door to the party and got into a black SUV with the mayor’s emblem in gold on the doors as she left for an earlier event. As party goers checked in many were told that Taylor had been invited and that she might make an appearance.

As guests gathered in the spectacularly landscaped garden of Wichinski and Willet’s home, there was plenty of chatter about Taylor’s possible attendance.

When Taylor arrived at the party the throng of people noticed her but did not respond. She allowed Out In SA to take photos of her and then joined Wichinski and Fiesta Youth Board member Darrell Parsons for a conversation in a quiet spot.

There was no clamor by party goers to approach Taylor. Most maintained a polite distance.

Taylor did not stay for very long nor did she make any public remarks but she did take time to interact with revelers in the VIP lounge who were holding court on the home’s second story front balcony.

“I visited with her very briefly – just long enough to say we don’t agree on much but I shook her hand,” says attorney Justin Nichols.  “Give the devil her due – she showed up to a tough crowed and held her own. The best was when she put her purse down and danced. Thus is politics. Candidly, she was the only mayoral candidate or any other public official who made an appearance for the first two-and-a-half hours of the party.”

Later in the evening, Mike Villarreal, who’s challenging Taylor in the mayoral race, made an appearance at the party with his wife Jeanne Russell and made some brief remarks. Leticia Van de Putte sent a staff member in her stead.

Check out our Facebook Album with photos from this event.

Texas Association of Business to be honored by Equality Texas

Equality Texas announced on April 9 that they will present the Texas Association of Business with the Vanguard Award which...