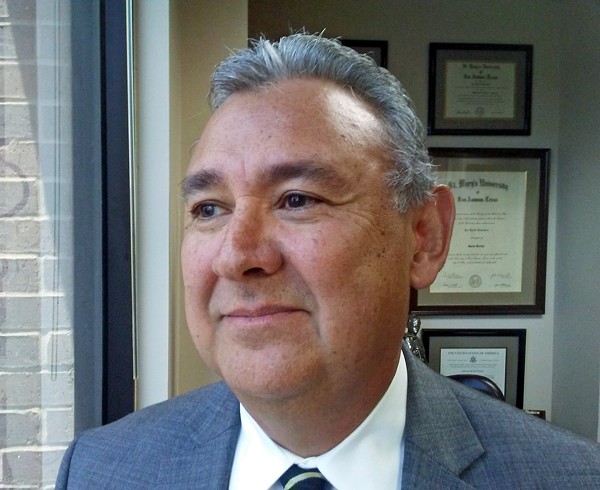 Joe D. Gonzales is sitting across from me, giving me a much-needed refresher on his favorite Broadway musical Wicked.

A silver statue of Lady Justice, one of the finest I’ve ever seen, stands behind him. The Democratic nominee for Bexar County district attorney gleefully explains the popular storyline, highlighting “the special relationship” between Elphaba, the Wicked Witch of the West, and Glinda, the Good Witch of the North. They “try to stay friends until the end, but then decide to separate [to] have different lives,” Gonzales says. I can’t help but note an unhappy parallel to his currently fraught relationship with DA Nico LaHood, whom he defeated by a large margin in the March primary election.

Many political observers may have viewed the 59-year-old Gonzales’ victory as poetic justice.

Long before LaHood went on-air to deplore the campaign contributions that Gonzales received from liberal philanthropist George Soros, the enchantment between the two men ended when LaHood threatened to “destroy” Gonzales after the latter raised the issue of prosecutorial misconduct in a murder case. The event took place in front of a state district judge, who in April backed up Gonzales’ story about being threatened by LaHood.

Gonzales says he and LaHood were part business owners of a building at one time. Their relationship was fine then. “He’s [even] come to my house,” the candidate says.

His rivals continue to paint him as soft on crime. However, during our interview, Gonzales explains his belief that everyone deserves their day in court no matter how grave the crime. “There are a lot of reasons why a prosecutor should temper justice with mercy,” he says, glancing back at the statue of Lady Justice.

As a Latino who grew up in the public school system and put himself through law school, Gonzales embraces his position as a role model for young people. He remembers how his mother once told him that getting a job at the then-Kelly Air Field meant you had arrived. “She had no idea what it was like to send someone off to college,” he says, adding that “an Anglo-American” chemistry teacher once made him the target of a joke when Gonzales told her that he wouldn’t need to learn about chemistry because he was going to be lawyer. “She laughed and said, ‘No, you’re not going to be a lawyer. People like you don’t become lawyers.’”

Gonzales’ impression was that this was intended as a racist comment. “She said it loud enough for the other kids to hear – and they laughed,” he recalls.

This fueled his motivation to succeed. “All these years, I feel I proved her wrong.”

As he explains how he decided to run for DA, he recalls his time at St. Mary’s University Law School and even earlier – a random event in grade school that planted the seed that would blossom into a passion-filled profession. He and a schoolmate were playing a hacky sack game, a popular pastime in the 1970s. The bag fell in the center of the room, and both boys dived in to retrieve it. At just the wrong time, a teacher walked in and assumed they were fighting. The principal passed judgement on them without giving them chance to explain. The lack of due process would stay with him throughout his life.

His 30 years of experience “dealing with people’s lives and people’s freedoms” have taught him to sleep on it if possible when a major decision is looming. “That’s very important because in my career. You don’t want to just have a knee-jerk reaction when you’re presented with an issue or with a situation where you have to react,” he says.

“You have to do the right thing, even when people aren’t looking,” he says, coming back to the things he’s learned during his studies and observations of crime and punishment. He feels LaHood has mismanaged the office of the DA. This was his impetus to run. “Many people have said that [my campaign] is revenge politics,” he says. “It’s not.”

Though Gonzales wouldn’t consider himself an art collector, he owns about twenty statues of Lady Justice. Varying in size and quality, the objects geekify his home and office. “Each one has a little story to tell,” he says with a gentle smile. The aforementioned statue he and his wife picked up in San Miguel de Allende.

Is there something in the practice of law that you know you can’t fix? I ask.

He pauses and breathes in deeply.

For about the seventh time, his phone pings. He says he can’t turn it off. Which is understandable, especially during a campaign.

Gonzales tries to leave his work at the office. He says the love and support of his family keeps him centered. “You can’t just shut [the job] off at 5 p.m. It’s hard to leave it behind. If you’re going to have any measure of success, if you’re going to be an ethical and dedicated lawyer, you have to be willing to put in the time and the effort,” he says. And that means taking calls from clients in the middle of the night. “I would say my work is 60 percent of my life.”

His wife, whom he describes as his “heart and soul,” draws my interest. I ask about her, saying, “They say behind every great man…”

“Is an even better woman,” Gonzales replies. They’ve been married for as long as he’s been a lawyer. In fact, the couple put each other through law school. He and his wife, who is an associate judge, have one college-bound daughter. His wife and daughter love musicals, too.

Gonzales says he and his family have a 15-year tradition that they spend Thanksgiving weekend in New York City. They have Thanksgiving dinner at Rockefeller Center. Afterwards, he and his daughter go ice-skating.

“Well, she skates. I fall,” he says with a chuckle.

When asked about the key to a happy marriage, Gonzales answers immediately.

“Compromise,” he says. “There’s a give-and-take. That’s the hallmark of our marriage.”

A state district court judge from Houston will be on the ballot in November as a candidate for the Texas...