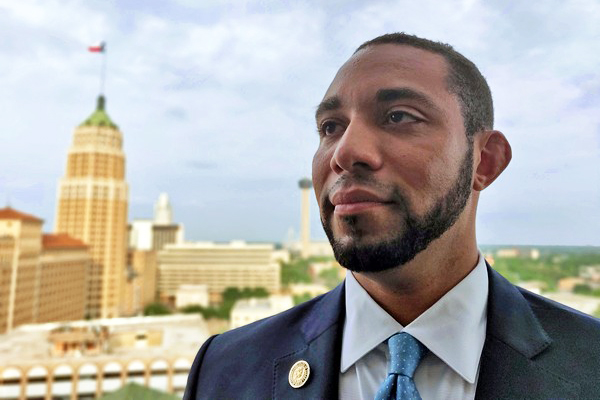 It could be argued that Tommy Calvert’s 2014 election as Bexar County Commissioner marked a turning point in local leadership. It wasn’t only that he was both the youngest person and first African American person to be elected to the position, but also because his background in civil rights and left-leaning politics ensured that a different kind of court was on the horizon.

I’m sitting across from Calvert, who represents Precinct 4, on the 10th floor of Paul Elizondo Tower. Scores of awards and mementos surround his workspace. What stands out most is an outsize, bright-yellow Legoland key to the city that sits on his desk.

The path that led Calvert, now 38, to this balcony view of Southeast San Antonio is one built through community service and a familial legacy of grassroots activism. My own entrance onto his timeline took place in 2013 when I witnessed Calvert, then a member of the media and a self-described “infotainer,” hosting a program on KROV-FM, a nonprofit radio station he founded in partnership with Trinity University. He spoke about social issues with a patience that may be his strongest suit — and one that helped him defy political gravity. He says he’s able to put his political opinions aside when he needs to play “George Stephanopoulos from time to time.” By that, he means: when necessary, he can remain independent and objective.

In 2014, I interviewed Calvert, this time as a candidate, about his bid for his current position. The opening was created when his predecessor, Tommy Adkisson, decided not to run for reelection after a 16-year incumbency so he could seek higher office.

Today, the county commissioner who sits before me attests that, despite his ascendance to precinct-wide celebrity, he’s “still the same Tommy.”

“I still play all those roles in some ways,” he says.

When I tell Calvert that I think his youthful appearance has prevailed, he laughs and reminds me, “Black don’t crack.”

What is seeming to crack — and quite steadily — is the hold the old guard has long had on county leadership. The first disturbance in the Force could be felt when County Judge Nelson Wolff announced that 2018 would be his final campaign run. Then, the unexpected death of Paul Elizondo, the long-time Precinct 2 commissioner, left an abrupt vacancy.

The days following Elizondo’s death created a perfect storm. And, in perhaps his most streamlined use of his budding political influence, Calvert — who had just secured a second four-year term in an unopposed race — seized an opportunity.

“I recommended to the Judge [Nelson Wolff] that we bring in Justin [Rodriguez],” he says. “You’re getting an exclusive.”

Calvert says the integrity and work ethic of Rodriguez, a former member of the Texas House, earned the recommendation.

“Justin is a workhorse. I see him hitting the neighborhoods [and] going to the grassroots,” he explains. “If you’re connected that way, you can’t help but change Bexar County — because we’ve been disconnected.”

Calvert remembers himself “smiling like the Cheshire Cat” when he first heard Rodriguez asking questions about his new position.

“I said, ‘Oh…he’s just like me. He’s asking the exact same questions that I used to ask,” Calvert says. “I just leaned back and let him do it.”

I ask if he ever looks at his project wish list and wonders whether he’ll be able to complete them in time.

“No,” he says. “I just think I have to wait for some people to go off the scene.”

Calvert admits that he has changed in one respect since taking office.

“I’ve had to become stronger in my faith because of the devils who operate in this environment,” he says, flatly describing “the underbelly of who Bexar County really is” as “ugly.” He’s learned, however, to be grateful for the “arrows, knives and machine-gun fights,” because those experiences helped him become a better person.

As he tells me about the choice someone in his role has to be either a part-time, full-time or overtime commissioner, he says he feels “more blessed than most people” since he “probably [gives] more than most people.” (Calvert is unmarried and has no children, but quips that the people he represents in his precinct are his “octuplets.”) As a result of his abundant giving, he faces “bigger challenges, bigger enemies and bigger threats.”

“When you’re the light, the dark comes at you,” he says, adding that all the great things that have happened in his life weren’t necessarily the things that he’d plotted out for himself. He used to think, for example, that he was going to run for a seat in the Texas House. But, as Rodriguez would agree, an elected official can get a lot more done on the Commissioners Court. “The good Lord puts you in those positions to be of service if your heart is open.”

As we exit the building, the overtime commissioner walks to the only car left on this side of the street.

Calvert is exactly where he feels he needs to be. In the belly of the beast we call Bexar County.

The LGBTQ Caucus, formed this year, notched a major victory Thursday evening, defeating a controversial measure as the Texas House...