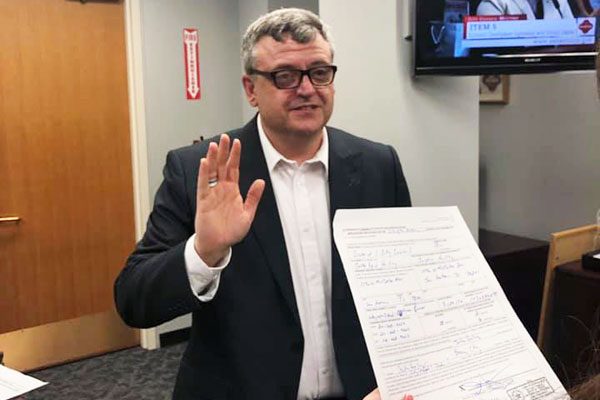 Justin Holley, an executive with a local hotel management company who is challenging District 1 City Councilman Roberto C. Treviño in this spring’s General Election, will officially launch his campaign on January 26 at the Casting Pond by Woodlawn Lake.

Holley is one of five candidates (so far) who are seeking to oust Treviño. The other four are Brad Kessler, Alan Dennis Inchaurregui, Raymond Zavala and Lauro A. Bustamante.

Holley has been active in the LGBT community. His company was one of the sponsors of Pride Center San Antonio’s 2016 New Year’s Eve Kiki. Earlier that year, Holley was one of over 200 small businesses owners from across the state who signed a letter in opposition to any legislation which would legalize discrimination against LGBT Texans or visitors to Texas.

According to his campaign website, “In 2017, Justin purchased and renovated a home in Woodlawn Terrace. Keeping his roots deep in our city, the house was owned for over six decades by his great aunt and uncle.”

In an interview with the Rivard Report, Holley said he is fiscally conservative, socially liberal, and as a gay man believes, “Government is there to protect its citizens. Everyone should be treated equally.”

Holley initially announced his interest in seeking the District 1 seat last August and has spent the time since then building a campaign organization and fundraising. A few days ago, he filed the paperwork with the City Clerk’s office to make his candidacy official.

The General Election is slated for May 4, 2019. Candidates have until February 15 to file an application for a place on the ballot.

Originally published in the San Antonio Current. Drummed up on the rooftop of a Greenwich Village apartment by playwrights Jonathan...