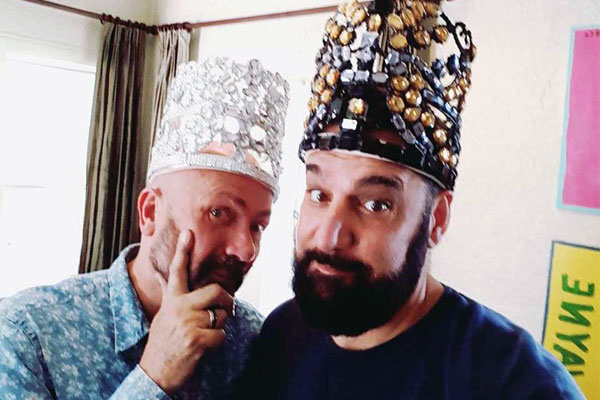 This is the first time Cornyation has appointed two kings but not the first time it has had two monarchs. In 2014, Steve and Jody Newman, proprietors of the Friendly Spot Ice House served as King and Queen Anchovy. Beers and Bobo own W.D. Deli. The kings’s coming out party was started in 2012 by James Lifshutz to honor that year’s monarch, Charlie Gonzalez.

Cornyation celebrated its golden anniversary last year. The Fiesta staple is a spoof on the Coronation of the Queen of the Order of the Alamo with bawdy and hilarious skits which skewer the famous and powerful.

Cornyation is one of the most popular Fiesta events, typically selling out all six of its performances each year. Over its life as a nonprofit organization, it has donated over $2 million to local charities. For a $25 donation, attendees at the Kings Party can enjoy beer, margaritas, street-style tacos, jalapeños rellenos and other treats with a live soundtrack by King Pelican. The party will also be an excellent place to buy and trade Fiesta medals.

Food and beverages are being generously provided by Chris Hill’s El Mirador and the Esquire, Blanca Aldaco of Aldaco’s at the Dominion, GLI Distributing, and this year’s Anchovies, who are bringing W.D. Deli’s famous cookies.

A San Antonio transgender man, who has twice been denied standing to seek child custody and visitation rights by the...