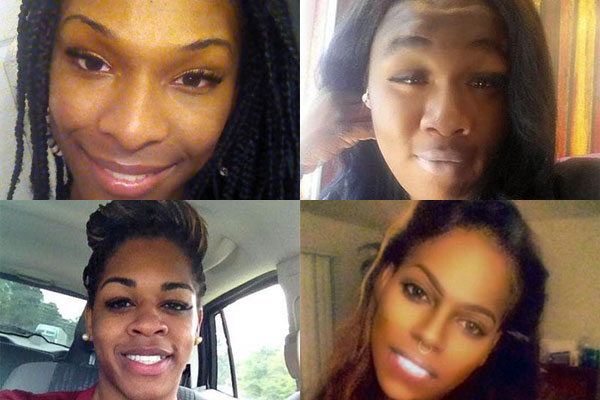 Elisha Walker of Pittsburgh; Penny Proud of New Orleans; Ty Underwood of Tyler Texas; and Zella Ziona of Montgomery Village, Maryland are all transgender women who were murdered this year. In San Antonio, the Transgender Day of Remembrance will be observed on November 19 at the Metropolitan Community Church of San Antonio. (Photos: BlackDot.com)

The Metropolitan Community Church will once again host the annual Transgender Day of Remembrance observance in San Antonio on November 19.  The day honors the memory of those murdered because of anti-transgender prejudice.

The Transgender Day of Remembrance was originally started to commemorate the murder of Rita Hester in 1998. Hester was stabbed to death in her apartment in Boston. Police have still not found her murderer.

According to GLAAD, trans women of color make up a disproportionate number of the victims of trans violence. This year, an estimated 22 trans women have been murdered across the U.S.

Some of the lives lost this year have been chronicled by GLAAD on their website. They include:

The official website for the Transgender Day of Remembrance maintains a list transgender people murdered around the world in 2015.

A report in Time magazine last summer points out that despite recent legal victories for LGBT people, “the heightened visibility has also put more people at risk of being harassed or hurt.”

One advocate explained to Time:

“Right now we’re experiencing a Dickensian time, where it’s the best of times and it’s the worst of times at once,” says transgender rights advocate Masen Davis, who formerly ran the Transgender Law Center. “We’re seeing a marked increase in the public awareness about transgender people and really incredible progress for trans rights, especially from a legal perspective. At the same time, we still represent and are part of a community that experiences incredibly high rates of unemployment, poverty and violence.”

This year’s observance of the Transgender Day of Remembrance in San Antonio includes a march from San Antonio College to MCC San Antonio.

San Antonio observes the Transgender Day of Remembrance, November 19, 2015. March from San Antonio College to MCC San Antonio (611 E. Myrtle) steps off at 6 p.m. Service at the church follows from 7 p.m. to 9 p.m. Light refreshments will be served. For more information call 210-472-3597.

A one-woman show commemorates Veteran’s Day by encouraging a discussion about Post-traumatic Stress Disorder. PTSD and Me: A Journey Told...