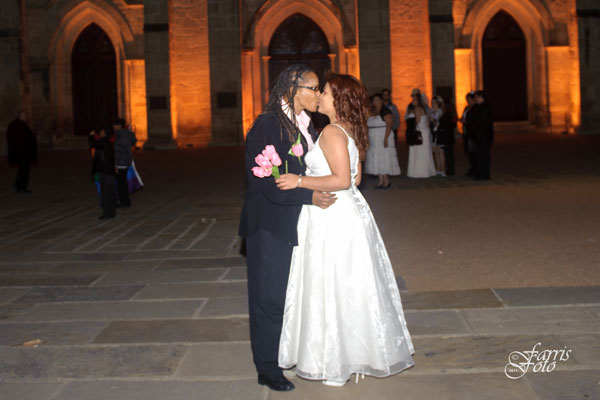 Same-sex couples are now free to legally participate in the annual mass weddings at the Bexar County Courthouse on Valentine's Day. This couple, photographed in 2012, exchanged vows at that time but their union was not legal. (Photo by Lauryn Farris)

Thanks to the Supreme Court’s ruling last summer that made marriage equality legal, this will be the first year same-sex couples will be able to participate in the mass weddings held annually at the Bexar County Courthouse on Valentine’s Day.

To mark the occasion, activist Rene Orozco is organizing a Love Wins march from Milam Park to the courthouse to celebrate.

In years past, same-sex couples would participate in the ceremonies as an act of protest but despite exchanging vows, their unions were not legal.

The ghosts of Valentines past

In 2012, a dozen same-sex couples who joined in to exchange courthouse vows received a religious slap from the Rev. Joe Sullivan, the minister who conducts mass weddings. Sullivan threatened the couples with “acts of vengeance” from God if they participated in the midnight ceremony.

In a report published in QSanAntonio, Julie Pousson of GetEqual Texas said, “Minister Joe Sullivan said that our couples were there solely to be repulsive . . . [The couples] stood their ground for more than five minutes of hate speech and contradictory logic from the good minister before he finally relented and performed the wedding.”

On the day after, Sullivan told the San Antonio Current the presence of the LGBT couples at his event was an embarrassment. “I didn’t even look at them anymore because they were embarrassing to me and a whole lot of other people. I don’t hate homosexuals, but I hate homosexuality, I don’t mind saying so. And I think I have a right to say that, don’t I? I think it’s wrong and not of God. … I didn’t ask them to leave, but I will say this: I would have been glad if they had.”

Complaints from gay couples about the preacher’s remarks prompted County Judge Nelson Wolff to call for a re-examination of the popular ritual and the perennial role of Rev. Sullivan.

There should be no such hassles this year. Orozco says he is planning for a “peaceful and very visible march.”

Couples who want to marry need a marriage license, which must be obtained 72 hours before the ceremony from the Bexar County Clerk’s Office in the Paul Elizondo Tower, at 101 W. Nueva St.

Those wishing to participate in the Love Wins event are asked to meet on Saturday, February 13 at 10:30 p.m. at Milam Park, located at 501 W Commerce St. The march to the Bexar County Courthouse will begin at 11 p.m. with the marriage ceremony beginning at midnight.

“This is a very grassroots event so please feel free to invite your supporting friends and family and bring signs of LGBT love and support,” says Orozco. “This day is sacred to those getting married; our peaceful presence is to show support and celebrate the right for an LGBT person to marry who they love.”

The law firm of de la Riva & Associates invites the community to a "Town Hall on Marriage Equality" at...