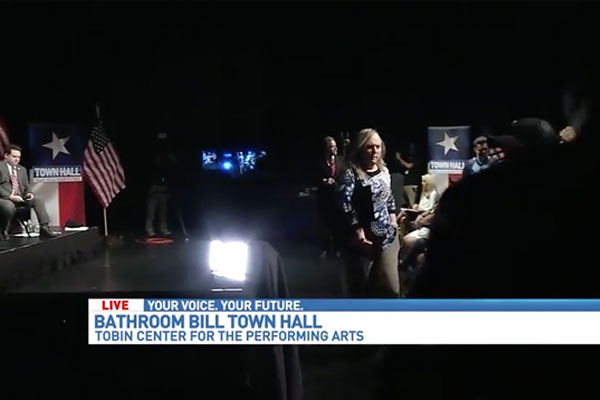 On Thursday night, WOAI’s Randy Beamer tried to host a “town hall” on Texas Senate Bill 6, the anti-trans measure that started to wind its way through the legislature this week.

It did not go well. After about 15 minutes of discussion, LGBTQ activists and allies had heard enough, stood up and walked out of the Tobin Center during the live broadcast. Much of the crowd emptied out into the building’s lobby, where they chanted until security forced them out.

Inside the theater, it didn’t get much better after that, as panel members belittled trans people sitting right next to them and warned about the consequences of “forced integration,” all while Beamer asked probing questions about “morality” and “molestation” and whether this whole debate might be “legitimizing” trans or gender-questioning kids.

The walkout in protest of the panel wasn’t impromptu. It goes back to last week when advocacy groups like Equality Texas and the Human Rights Campaign first learned the station had planned a debate with three panelists – Kolby Balcolm, a local trans man and military vet, SA Hispanic Chamber of Commerce CEO Ramiro Cavazos, and Mike Knuffke, a gadfly with the “San Antonio Family Association” who rears his head whenever LGBTQ people want same-sex partner benefits or arts funding or rights or anything like that.

The advocacy groups suggested more trans people be on the panel, including activists or policy experts who could talk specifically about the bill before the Legislature. Instead, producers added Weston Martinez, a perennial conservative candidate probably best known for losing local council and Rail Road Commission races than for his firm grasp on state politics, and Shaneka Calloway, a therapist who often works with people in the LGBTQ community – neither of whom are trans. When advocacy groups still pushed for the station to include more people, this was their solution: Have your people sit up front, and the panel can call on them as “experts” as needed.

WOAI producer Amanda Emery later chalked it up to a “miscommunication,” telling the Current, “I don’t know if it was on my end or on their end.”

Regardless, that made it kind of awkward when Beamer, during a commercial break early on in the debate, ran through a list of people invited but who couldn’t attend (like Lieutenant Gov. Dan Patrick, the driving political force behind SB 6 at the capitol, and Sen. Louis Kolkhorst, the bill’s author), naming Equality Texas as one of those groups. They were right there. Sitting right next to him.

One of those people up front was Lauryn Farris, a trans woman and longtime local activist. About 15 minutes in, after Beamer asked Knuffke about the risk of crime associated with trans-accommodating bathrooms and Knuffke launched into a line about school kids, Farris stood up and shut it down. “We’re done here,” she said, before leading what looked like more than half the crowd out of the building.

“It was beat up the trannys and appeal to your base, a pep rally for SB6,” Farris told us afterward. “That’s what was happening in there. It was an ambush.”

The kind of ambush Balcolm is clearly used to dealing with. Inside, when Beamer asked why trans people couldn’t just use their own special restrooms, Balcolm delivered this sharp, packed response: “We’ve tried segregation before and it didn’t work. We don’t want to be separate. We want to be equal. … Realize we have bathrooms based on two sexes where we have a society of more than two sexes and absolutely more than two genders. That’s where the issue really lies. We have binary restroom system in an increasingly non-binary society.”

But Beamer was less interested in how society evolves, more in questions of morality, crime, and molestation – or, as he put it, “Men going into women’s bathrooms, is that not going to happen from a molester point of view? A molester’s going to molest no matter what?” Some of those still in the audience were visibly put-off by Beamer’s questions, like “Some people who are for this bill see a gay lifestyle, a transgender lifestyle, as a choice to be discouraged and that this bill would only encourage that among kids.” Knuffke wouldn’t even take the bait – “I don’t know about encourage.”

“Legitimize maybe?” Beamer added. He circled back around to the thought later, unprompted, saying, “They are concerned that this will only encourage kids to explore something that some people consider an immoral lifestyle.”

Meanwhile, Martinez confusedly rambled about property rights for a minute before circling around to the notion that trans people want “special rights.” See if you can follow this one: “Where’s my bathroom? Where’s my bathroom because I have five kids? I go into a restaurant 10 minutes before they close, and you know what they do? They turn the lights off. Where’s my protected class? We need to have a level of common sense when we approach this.”

Martinez later delivered the tired, cringe-worthy line that trans rights at public schools are dangerous because maybe someone like him would’ve wanted to watch girls shower in the locker rooms when he was in high school. “This is what it always comes down to,” was Balcolm’s retort. “It’s the fear about what cisgender guys are gonna do in the bathroom, not transgender people.”

When the discussion turned to economics and big-business concerns that some people might not want spend their money in a state that openly discriminates against one group of people, Balcolm shut that down, too. “I just find that really, really saddening, arguing over what it will cost and what it doesn’t cost in dollars and cents,” he said. “You should be ashamed of yourselves. You are talking about my basic human need to use a restroom.”

That’s because if SB 6 becomes law, Balcolm would be forced to, in many circumstances, use public restrooms that correspond with his birth certificate. When he transitioned, he changed all his other legal documentation, but not that one. That’s because, as he put it, “it was not mine to change … that was part of my history and I decided not to change it. That’s my right.” Beamer followed up with some clunky questions about hormone therapy and “how long does it take,” because “part of this is the appearance.” Knuffke asked if transgender people “have a card, a membership?”

When Beamer again turned to fear and crime and molestation, Balcolm’s response: “You guys are so concerned about crime. You might mention murder. The murders of transgender people that are happening, including two people recently in New Orleans.”

It hit rock bottom when Knuffke pointed to Balcolm and declared, “Kolby is different,” after which Balcolm immediately, forcefully responded, “No I am not. I am not different.” When Beamer hushed him so Knuffke could finish his thought, Balcolm muttered, “This is getting rough.”

Knuffke capped the debate insisting people like him are the real victims of intolerance. “These are the issues. Even though maybe the LGBT is not tolerant and doesn’t want to hear these things, these are real issues. You need to listen. You need to learn how to listen. You really do.”

Seems he can rest assured he’ll always have a sympathetic ear in Beamer and WOAI.

Here’s a scene from yesterday’s walkout.

An exhibit of artwork by women of color which commemorates the 30th anniversary of the Esperanza Peace and Justice Center...