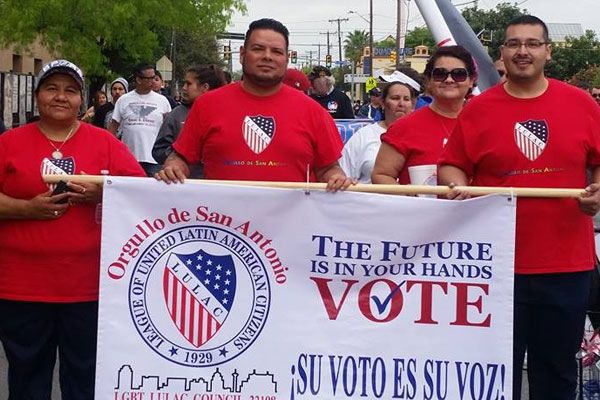 Members of SA's LGBT LULAC council participated in the Cesar Chavez March. The group will be offering workshops at the National LULAC Convention in July. (Photos: Facebook)

The local LGBT LULAC chapter, Orgullo de San Antonio Council #22198, will be offering two LGBT workshops during the 88th LULAC National Convention and Exposition in San Antonio from July 4 through 8.

Over 15,000 LULAC members, members of Congress, cabinet secretaries, local elected officials, and academic experts from across the country are expected at the convention which will be held at the Henry B. Gonzalez Convention Center.

The San Antonio LGBT LULAC chapter’s workshops are among a variety of presentations available to conventioneers. The first, Queer Brown Voices: Personal Narratives of Latino/a Activistm, will be presented on Thursday, July 6. The second, Building an LGBTQ Inclusive and Healthy State, will be offered on Friday, July 7.

LULAC (League of United Latin American Citizens) was founded in 1929. It promotes civil rights for Hispanics living in the United States. Membership comes from every state in the union with over 1000 councils nationwide. LULAC organizes voter registration drives, citizenship awareness sessions, sponsors health fairs and tutorial programs, and raises funds for scholarships.

According to statement on its website, “LULAC fosters dialogue between the Hispanic and LGBT community, both of whom share a common goal: full equality.” Since it’s founding, Orgullo has been active in the city’s LGBT and Latino communities. “Orgullo de San Antonio has worked to facilitate an open line of communication between the LGBTQ and the Latino/Hispanic community,” Congressman Lloyd Doggett, wrote in a letter of support to the group. “This council works to bridge these communities through education and increased awareness of current issues involving civil and human rights.”

2017 LULAC National Convention and Exposition, July 4 through 8 at the Henry B. Gonzalez Convention Center. More information available at this link.

Antemìa Kavillari, 27, is a local transgender Latina artist and musician, and someone I’m proud to call a friend. We...