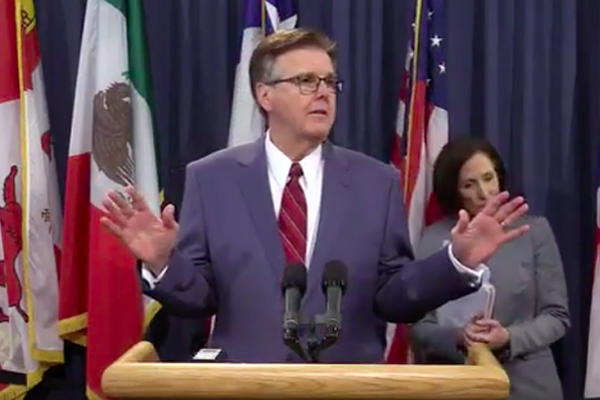 Texas Lieutenant Gov. Dan Patrick began his Thursday press conference introducing a bill that would segregate transgender people from the general public by quoting Martin Luther King, Jr.: “Our lives begin to end the day we become silent on things that matter.”

But not once during his press conference with GOP state Sen. Louis Kolkhorst, who’s decided to carry Patrick’s legislative priority through the Texas Senate, did Patrick mention the community most affected by his bill: transgender people. That’s because Patrick and Kolkhorst have decided to market the anti-trans Senate Bill 6 as a “privacy bill.”

Meanwhile, state media have settled on the equally obnoxious “bathroom bill” title. That’s because the legislation, among other things, would ban transgender people from using the bathroom that corresponds with their gender identity in public and government buildings. The bill would also ensure all public buildings (libraries, schools, city offices, etc.) only offer bathrooms divided by biological sex, and allow for private businesses to decide for themselves whether they want to accommodate trans customers.

And that’s not all. Patrick said SB 6 would also nullify trans protections in local equal rights ordinances that cities, like San Antonio, have enacted to protect the community from discrimination.

While Patrick and Kolkhorst say the bill is about “privacy,” both politicians mentioned the overthrow of the Houston Equal Rights Ordinance, or HERO, last year as the inspiration and model for statewide legislation like SB 6.

“In the one instance of Texans being allowed to vote on this issue, the ordinance was soundly defeated,” said Kolkhorst, referring to last year’s vote to repeal HERO. Like Kolkhorst and Patrick, opponents in Houston drummed up unfounded fears over bathroom privacy in order to sway voters.

Asked if the bill will protect the privacy of trans Texans, Kolkhorst paused, then replied: “This bill will allow school districts to personally accommodate for those situations.” It was as close as either lawmaker got to addressing the transgender community, which appears to be the obvious target of the bill.

“This bill stops local cities from passing policies that allow men in ladies’ rooms,” Patrick said, echoing the anti-HERO rallying cry from last year (“No Men in Women’s Restrooms”). Patrick has previously called this bill his “women’s privacy act,” saying it will protect women from male predators; a curious fixation for someone who recently stumped hard for Donald Trump, a President-elect who’s been caught on tape bragging about sexually assaulting women.

Thursday’s press conference was complemented with a constant stream of boos coming from outside the room, forcing Kolkhorst to pause throughout her address.

“As folks get to know transgender Texans, you’ll find that they care about privacy and safety just like everyone else, and simply want to be able to go to school, work, out to dinner, and provide for their families,” said Smith in a statement.

The bill’s many opponents include trans advocates, civil rights lawyers and business owners who fear the bill could scare business away from the state. And those fears aren’t unfounded. Late last year, a study from a Texas business advocacy organization estimated the state would lose $8.5 billion a year and put at risk up to 185,000 jobs if it passed an anti-trans bill.

San Antonio business owners who rely on the tourism industry are particularly worried about the NCAA pulling the 2018 Final Four out of San Antonio should Patrick’s bill pass. After North Carolina passed a similar anti-trans bill last year, the NCAA made good on its threat to move all championship games out of the state. Studies have estimated that North Carolina has already lost nearly $400 million in business revenue and 1,000 jobs since the law went into place.

Patrick’s response? All of those concerns and questions over SB 6, what restrictions it would place on the state’s transgender community, and how it could impact the Texas economy? It’s actually just “fake news.”

Calling out what they say are similarities between President-elect Donald J. Trump and San Antonio Mayor Ivy R. Taylor, Mujeres...