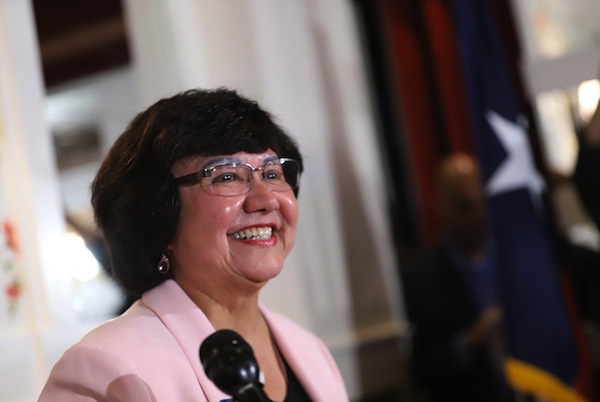 Lupe Valdez gives her victory speech after defeating Andrew White in the Democratic runoff for governor on Tuesday, May 22, 2018. (Photo: Leslie Boorhem-Stephenson for The Texas Tribune)

By Patrick Svitek and Brandon Formby
The Texas Tribune, May 22, 2018

After a tight race throughout much of the evening Tuesday, Lupe Valdez pulled ahead late to comfortably defeat Andrew White in the Democratic runoff for governor, according to unofficial returns.

Valdez goes into the November general election as the first openly lesbian and first Latina candidate to win a major party gubernatorial nomination in Texas. She told cheering supporters in Dallas that she’s not deterred by conventional wisdom that she faces long odds against Gov. Greg Abbott, a well-funded incumbent.

“Please tell me when I didn’t have an uphill battle,” she said.

Valdez, 70, also said she’s tired of politicians not looking out for everyday people.

It was a closer race than expected, with Valdez ahead of White by just over 5 percentage points as the final precincts were coming in. By 10 p.m., White had called Valdez and conceded the race.

“Tonight was a tough, tough night, but I’ve enjoyed getting to know so many people around this state,” White told reporters at the Harris County Democratic Party headquarters in his hometown of Houston. “I wouldn’t trade this for the world.”

White pledged his full support to Valdez and said he is “ready to help in any way I can to give Greg Abbott an early retirement party.”

Valdez rode a strong showing in Dallas County, where she had served as sheriff, and neighboring Tarrant County. She also won big in populous border counties like El Paso, Hidalgo and Webb.

White, the son of late Gov. Mark White, saw a big boost from his home county of Harris, but it wasn’t enough to overtake Valdez.

Valdez’s supporters said her campaign style of focusing on kitchen table issues resonated with voters, even though White had more campaign cash throughout the year. They also said her professional career as a federal agent and previous political experience in Dallas County made a difference.

“I’ve always been a fan of how she represented herself and held her own in the community,” said supporter Brandon Vance.

The victory by Valdez is an important sign of change, another supporter said.

“The country’s changing, we’ve just got to pull them out of the darkness,” said Paul Aguon of Carrollton, adding that he and his husband Mark Patterson supported Valdez for sheriff when she first ran in 2004 — back when Dallas County was a Republican stronghold.

To become governor she’ll have to topple Abbott, who boasts high approval ratings and a $41 million war chest. Abbott’s campaign wasted no time attacking Valdez, releasing a video Tuesday night that recapped some of her stumbles during the nominating contest. Among them: Her backtracking on whether she’d be open to raising taxes as governor.

“Lupe Valdez’s inability to articulate a clear vision for Texas, coupled with her lack of leadership in Dallas County, proves that she is wrong for Texas,” Abbott spokesman Alejandro Treviño said in a statement. “As she continues in her struggle to give definitive answers on questions like whether or not she would raise taxes on Texans, Governor Abbott will be crisscrossing the state articulating his message of economic freedom and individual liberty.”

Valdez said she’s confident that she’ll have an easier time raising money now that she has the nomination.

“He may have all that money, but we’ve got the grassroots,” she said. “For sure, no one is going to buy this election.”

Valdez finished ahead of White in the March primary, getting 43 percent of the vote to White’s 27 percent, as both emerged from a crowded field that included seven little-known candidates.

The runoff period was highlighted by White’s weeks-long push for a debate with Valdez, which she ultimately agreed to earlier this month after a tumultuous stretch that saw her lose an endorsement to White from a group of young Hispanic activists. At the debate, they clashed over long-simmering issues in the race: Valdez’s cooperation with federal immigration authorities as sheriff, White’s personal opposition to abortion and whether Democrats should nominate a self-styled “moderate” in White.

With the nomination in hand, Valdez will also be up against recent Texas history: The state’s voters have not elected a Democrat to statewide office in more than two decades.

Aguon said he still believes Valdez has a shot at toppling Abbott.

“I hope so,” he said with a sigh. “We held our breath for same-sex marriage and look what happened: We saw it in our lifetime.”

Valdez painted the GOP-controlled state government as one that cares more about special interests than the needs of their constituents. She also said the Republican Party, which is heavily dominated by white men, is out of touch with the changing demographics of the second most populous state in the U.S.

“There’s a change coming in Texas and a lot of people are ready for it,” she said.

Originally published in the San Antonio Current. As part of American Idol’s season finale, which included special performances from judges...