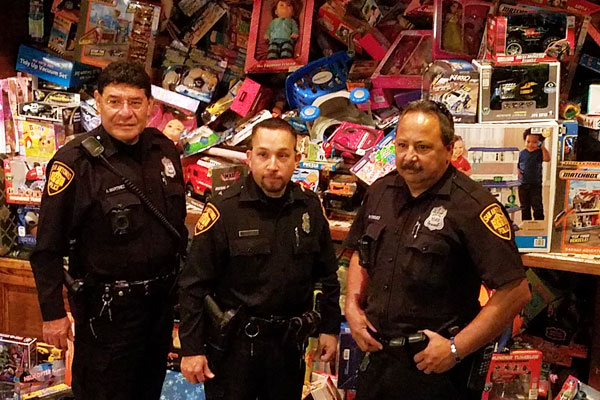 SAPD officers were at Sparky's Pub on December 20 to pick up toys collected by Main Avenue businesses for the Blue Santa Program. (Courtesy photos)

Three officers from the San Antonio Police Department came to Sparky’s Pub on Tuesday, December 20 to pick up a record amount of toys collected by businesses from the Main Avenue Strip on behalf of the Blue Santa Program.

Scott Lee-Ross, the marketing director for Luther’s Cafe, Knockout Sports Bar, Sparky’s Pub, and Heat Nightclub, told Out In SA the businesses presented Blue Santa with almost $10,000 in toys collected at events held from December 9 through 19.

This is the ninth year the businesses, which are owned by Texas Heat Investments, have held the toy drive. According to Lee-Ross, the items collected on the Strip represent the largest individual contribution of toys to Blue Santa this year. The Blue Santa Program was started in 1976 by the San Antonio Police Officers Association. According to their website, “Blue Santa is all about bringing hope and joy to families that struggle to make ends meet during the toughest times of the year, the holidays.”

Aside from toys, Blue Santa also collects food and monetary donations which give a helping hand to thousands of needy families across San Antonio.

Lee-Ross says the toy drive on the Strip is a collaboration that includes the businesses, their employees and customers, and liquor distributors who provide complimentary beverages for the fundraising events.

Local community organizations also participated. One toy drive fundraiser, held at Heat Nightclub on December 10, was co-sponsored by the Alamo Empire, Renegade Bears of San Antonio, Sisters of Perpetual Indulgence and the local chapter of the Texas Gay Rodeo Association.

Lee-Ross says the admission at most of the fundraisers was a toy or a cash donation. Cash collected at the events amounted to $4200 and was used to purchase additional toys.