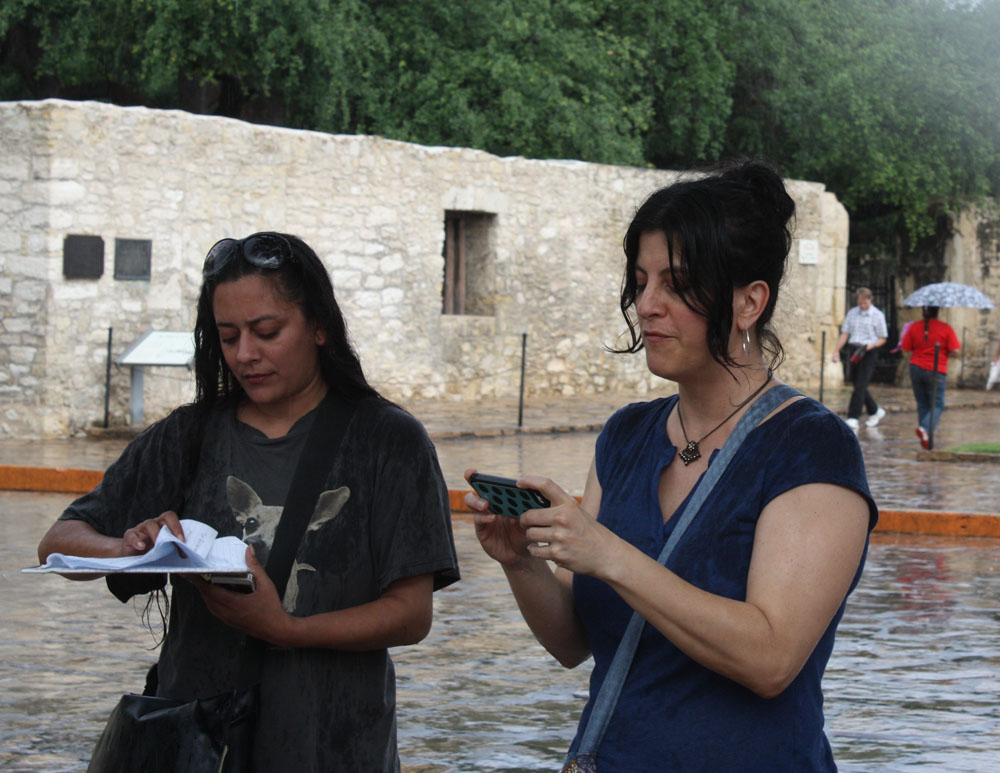 Sala Diaz Director Anjali Gupta and artist Michele Monseau perform Tania Bruguera's Tatlin's Whisper No. 6 at the Alamo to protest Cuba's treatment of the artist. Photo by B. Kay Richter.

Though their group was small, their message was clear; Tania Bruguera should be free to practice her art.

Standing in a light drizzling rain, about 10 people met in front of the Alamo on a Friday evening in late May to show support for international Cuban-born artist Tania Bruguera.

Anjali Gupta, sirector of San Antonio art space Sala Diaz, wants to shed light on Bruguera and other artists across the globe who find themselves on the wrong side of the law.

“We are here .. in a larger context, in support of artists and activists worldwide who have been silenced, criminalized, and otherwise persecuted or imprisoned for simply exercising their basic human right to freedom of speech,” Gupta said.

According to the LA Times, Bruguera has been unable to leave her Havana home base since the end of 2014. Since her passport was confiscated, Bruguera has been detained and released multiple times while the Cuban authorities decide if they wish to pursue criminal charges. After the conclusion of the final reading of her project, the Hannah Arendt International Institute for Artivism, she was placed under house arrest.

While reports about her current situation are fragmented, one thing remains evident: Bruguera is being persecuted for her public art displays.

Gupta said Bruguera was arrested in December for nothing more than planning an action–just like the one at the Alamo–and she has been hounded by the Cuban police ever since.

“For this specific iteration of her art piece [Tatlin’s Whisper #6], which never actually occurred, Tania is being charged with inciting public disorder, resisting authority, and incitement to break the law,” Gupta said.

Michele Monseau, an educator and artist in San Antonio, said Texas rallies were also held at the City Hall in Austin, Dealey Plaza in Dallas, and Tom Lea Park in El Paso. “Other people around the nation are raising awareness today,” she said.

Monseau agrees with Bruguera’s belief that art is not a luxury. “Her work pushes boundaries. She’s still under house arrest. We protest today in solidarity with other demonstrations across the country,” she said. Monseau then read from Bruguera’s “Manifesto of Artist’s Rights,” originally presented at the United Nations in 2012.

Anne Wallace is an artist and activist who helped develop Amnesty International’s Refugee Program and Women and Human Rights Program. She believes the cry against injustice will ultimately be heard in Cuba. “These venues will raise awareness,” she said. “Such freedom is inherent to human dignity.”

A passion for social justice brought Jenn Olivia to the gathering. “I am here to show solidarity. The artist community is persecuted,” she said. “Art is a valuable freedom.”

As her contribution, Olivia read a short text by controversial performance artist Karen Finley, one of the notorious NEA 4 artists whose projects were vetoed by the director of the National Endowment for the Arts based on subject matter after they had all already passed the standard peer review process in 1990.

“Today marks the opening of the Havana Biennial, which comes ironically at a pivotal point in history where relations between the U.S. and Cuba are warming up and cultural tourism is poised to become very big business,” Gupta said. “However, I’m not so much concerned about the breakdown of so-called diplomacy between Cuba and the U.S. due to this case. I am indignant about the hypocrisy of smiles and shoulder-patting on the diplomatic level and Cuba marketing itself as a cultural destination while continuing to persecute its own people, artists included.”

Come OUT, with Jenn Alva, Tencha La Jefa and more

As part of the San Antonio Public Library’s celebration of Pride Month, the Central Library is hosting the Come OUT...