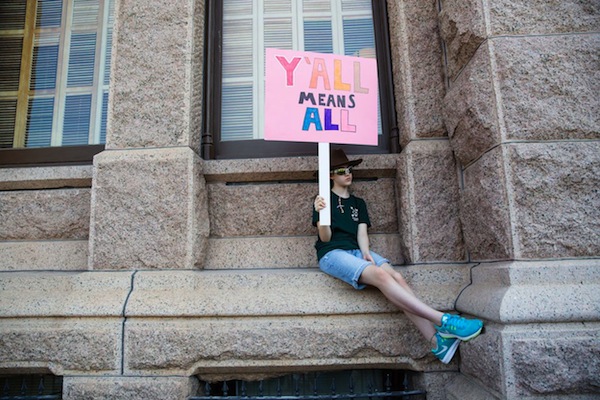 Members of various faith communities met at the Texas Capitol on Aug. 1 to speak out against the "bathroom bill." (Photo:Austin Price / The Texas Tribune)

In the end, the controversial bathroom bill went quietly.

For more than a year, Republican Lt. Gov. Dan Patrick led the crusade for a state law to regulate bathroom use for transgender Texans — an initiative that resonated with social conservatives, including many pastors, who backed him up. Patrick for months stood firm in his pursuit for a bathroom bill even while similar campaigns in other states fizzled out.

He was met by loud opposition that only grew with time and eventually proved to be a considerable political force.

Transgender women, men and children from across Texas descended on the Capitol to testify about how the proposal — which would ban local policies that ensured transgender individuals’ right to use public and school restrooms that match their gender identity — could endanger their lives. The business community rallied against the legislation too, giving House Speaker Joe Straus cover as he refused to negotiate with Patrick on bathroom restrictions.

That led to a stalemate over the issue during the regular legislative session that played out in dueling press conferences featuring legislative leaders slamming each other over the issue, threats by Patrick to force lawmakers to return to Austin by holding must-pass bills hostage and last-ditch efforts to attach bathroom restrictions to other pieces of legislation considered in the middle of the night.

And in the end, it wasn’t all that hard to see it coming.

“We hope that this time, this issue remains settled: Texans don’t want harmful, anti-transgender legislation,” JoDee Winterhof, senior vice president for policy and political affairs at the Human Rights Campaign, said as opponents of the bathroom bill seemed to release a collective sigh of relief when the House abruptly adjourned to end the special session Tuesday evening.

Opponents had been anxiously watching the clock tick down on the 30 days lawmakers were allotted to pass Abbott’s 20-item agenda.

But giving lawmakers a second shot to pass a bathroom bill only seemed to further shift momentum against the legislation as the debate stretched into the summer.

Little had changed for Straus — often a less vocal foil to some of Patrick’s priorities — who seemed to dig in his heels, arguing that the legislation would have dire economic and moral costs for Texas.

With the national debate over North Carolina’s bathroom still lingering, he was backed up by top business executives, including the heads of dozens of Fortune 500 companies, who worried that Texas could invite the same economic blows the Tar Heel State faced after passing a similar bill, including cancelled corporate expansions and sports tournaments.

They called Abbott to express their displeasure and launched a flurry of letters warning about the harm that laws deemed discriminatory toward the LGBT community could cause.

“Everybody realized the issue really wasn’t going to be resolved without everybody being heard,” said Jeff Moseley, CEO of the Texas Association of Business, who was among those who spearheaded the business opposition.

With the opposition growing louder outside the Capitol — eventually including major GOP donors and even Abbott’s campaign treasurer — the bathroom bill’s quiet death march inside the pink dome moved forward.

Within a week of returning to Austin for the special session, the Senate slogged through an 11-hour committee hearing and an eight-hour floor debate ending with a vote to advance the revived bathroom bill.

But it was almost immediately bottled up in the House, where Straus refused to refer it to a committee for consideration. Two other proposals that originated in the House were referred to committee but never got a hearing.

Support for the House bill seemed to drop as the special session began. Eighty Republicans had signed on as co-authors during the regular session — proponents of the bill regularly touted that number as they criticized Straus for keeping the bathroom bill from getting a House vote — but in the special session the number of co-authors dropped to 60.

“Some people were listening,” Lou Weaver, transgender programs coordinator for Equality Texas, said of the drop in co-authors. “Whether it was to the trans communities, to our allies, to our advocates, the business community, faith leaders — whatever the case may be, they did switch.”

Meanwhile, House leadership faced little opposition from proponents of the bathroom bill as they quietly worked to keep bathroom restrictions from being tacked on to key education bills that were moving through the chamber by limiting the amendments lawmakers could propose when those bills reached the House floor.

Across the rotunda, rumors that the Senate was planning to attach the bathroom restrictions to education bills proved unfounded.

By last week, the bill supporters were already conceding that Texas wouldn’t pass a bathroom bill. Republican state Rep. Ron Simmons of Carrollton, the legislation’s author, on Monday acknowledged that he had not recently talked about his proposals with the governor.

Abbott’s office did not respond to a request for comment on the bathroom bill’s demise.

According to those familiar with the negotiations, the measure was not even a factor as the House and Senate worked to hash out their differences over what emerged as the final sticking points of the special session: school finance and property tax legislation.

By then, some Capitol insiders had shifted focus to whether a second failed attempt would finally mark the end of the legislative debate.

“That’s the question: Is that the end of the bathroom bill?” Bill Miller, an Austin lobbyist, said.

LGBT advocates and their allies said they’re hopeful there’s been a shift in the debate, explaining that the prolonged fight at the Capitol gave them the opportunity to explain to leaders why proposals like the bathroom bill were discriminatory and dangerous.

But they admit the fight likely isn’t over.

During a late-night press conference on Tuesday, Patrick recounted a one-on-one meeting in which he urged Straus to pass a bathroom bill and “put this issue in the rearview mirror” because it wasn’t going away.

He was echoed earlier in the week by conservative groups that said they would urge the governor to bring lawmakers back for another special session to reconsider the issue.

Abbott has yet to rule out a second special session, but he did acknowledge during a Wednesday morning interview that “there’s no evidence whatsoever” that Straus will be swayed on the issue.

For his part, the speaker has so far only put out a short statement marking the end of the special session. It was short and focused on the House’s work to pass legislation “that was in the best interest of all Texans.” It didn’t mention the bathroom bill.

“The House was thoughtful, respectful and decisive in its solution-oriented approach,” Straus said.

Disclosure: The Texas Association of Business and Equality Texas have been financial supporters of The Texas Tribune. A complete list of Tribune donors and sponsors is available here.

The first candidate to challenge Republican Rep. Will Hurd for the Texas 23rd Congressional District seat is a native of...