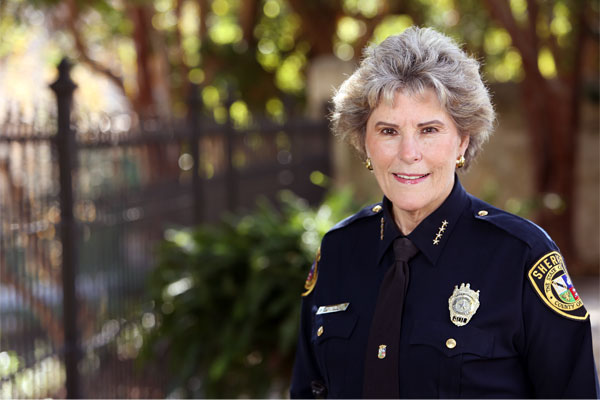 Susan Pamerleau has the distinction of being the first woman to ever be elected Sheriff of Bexar County. After four years on the job, the sheriff, a Republican, says she’s ready for another term. In November, she’ll face off against either Javier Salazar or Andy Garcia, depending on who wins the Democratic primary runoff.

Pamerleau retired from the United States Air Force after 32 years of service, having achieved the rank of major general and commanding the Air Force Personnel Center at the Pentagon. Upon retirement, she moved to San Antonio and took a job at USAA as senior vice president for military affairs.

In 2010, Pamerleau ran unsuccessfully for Bexar County Precinct 4 Commissioner against incumbent Tommy Adkisson, who prevailed with 54 percent of the vote. Two years later, she ran for Bexar County Sheriff and ousted Democrat Amadeo Ortiz, scoring 52 percent of the vote. After the election, Pamerleau told the San Antonio Express-News she knew some Democrats had crossed party lines to help her win.

Most recently, Pamerlealu has been in the news after the Deputy Sheriff’s Association of Bexar County called for a vote of no-confidence in her leadership citing low morale.

Sheriff Pamerleau recently invited Out In SA to her office for an election-season chat.

When you first ran for sheriff and even now, your political opponents criticized you for not having law enforcement experience. However, you had a very accomplished career in the Air Force. What in your past experience has helped you in your current job as sheriff?

Some of your political opponents have said morale is low in the Sheriff’s Department. How do you answer that criticism?

It depends on who you talk to. [The office used to be] the good-old boys, fraternalism; it was who you knew — not what you knew or how well you performed.

We’ve held people accountable, and if somebody has low morale because they’re being held accountable, that’s what happens. I think it’s reasonable to expect people to do their jobs.

We had some issues with mandatory overtime. The first two months I was in office there were 15,000 to 16,000 hours of mandatory overtime and 52 vacancies. Not only were they backfilling sworn deputies who weren’t showing up for work, they were also backfilling civilians. They also hadn’t even identified the difference between critical and non-critical positions.

There have been incidents of Sheriff’s Department officers getting in trouble (domestic violence, driving under the influence, smuggling drugs into jail, credit card fraud). What can be done to more carefully screen prospective employees to make sure you get the best candidates?

Let me put this in context. If you go out and get a DWI, it’s not splashed across the headlines of the newspaper for the next two days. That’s not an excuse, but it’s the reality.

When I divide 14 [the number of employees who got into trouble last year] into 1,898, the number of Sheriff’s Department employees, that is less than three-quarters of one percent of the entire organization. I’d match that against any large organization in this community.

However, one is too many. The county had an employee assistance program, but it didn’t meet the needs of people in law enforcement.

So we worked closely with the employee assistance program, and to their credit, they worked with us and hired two more psychologists who have worked extensively with individuals in law enforcement. Law enforcement is the most stressful of all occupations.

We have put more vigor into our employee recruitment selection process. We’ve established our core values: integrity, service, excellence, courage and commitment. If the public can’t have confidence that Bexar County Sheriff’s deputies will do the right thing, then we can’t do our job.

Some in the community feel your office has not been completely transparent regarding information provided to the public in some recent high-profile cases. What is your reaction to these charges?

I don’t think there’s an administration in the sheriff’s office that has been as transparent as we have been. When something bad or embarrassing happens, we’re the ones who provide the release to the media. We don’t hide it. It’s sort of like fish, you know, after three days it doesn’t smell any better.

We have a responsibility to the public to be open with them. But we’re also in the law enforcement business. To release information when we’re in the process of doing an investigation could jeopardize that investigation. We’re not the only ones who have that responsibility; the district attorney has it as well. Presently, the San Antonio Police Department conducts LGBT sensitivity training for cadets at the police academy. Do you think such training would benefit the Bexar County Sheriff Department’s recruits?

The Texas Basic Peace Officer course and Basic County Corrections course curricula both include instruction on multiculturalism and human relations, which help deputies identify forms and targets of prejudice. Gender and sexual orientation are included as points of discussion in the learning objectives, including role-play. We also supplement this with communications and problem-solving sections of the curriculum, which assists deputies in communicating sensitivity and compassion with diverse groups.

In addition, our training for the Prison Rape Elimination Act of 2003 addresses the use of proper terminology. Not only does this ensure needs of individuals are met, but also emphasizes being respectful of all people.

Would you consider appointing a liaison from the Sheriff’s Department to the LGBT community?

Yes, we’re glad to designate liaisons to the LGBT community — one for Detention and one for Law Enforcement, so that those designated have the appropriate professional expertise to respond to questions or concerns related to different functional and operational areas.

Would you be willing to meet with community leaders to discuss possible concerns with the conditions under which LGBT prisoners are held in detention?
Absolutely! In fact, we have met with members of the San Antonio Gender Association (SAGA) in the past, addressing their concerns, and have benefitted from those conversations by improving our procedures. We already have plans underway to meet with SAGA again to assure our policies are current and our staff are educated on concerns across our community.

Over 100 members of Congress and senators who belong to the Congressional Prayer Caucus Foundation have signed a letter admonishing...