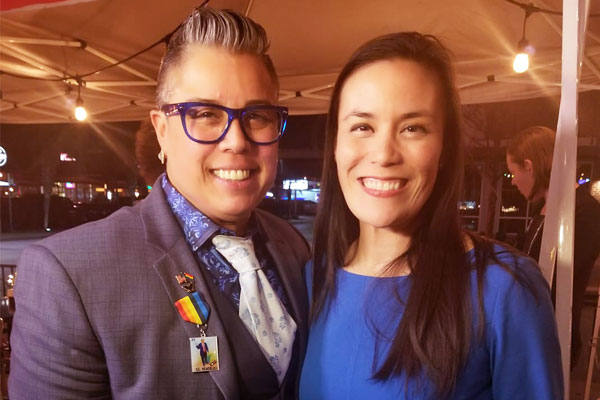 Almost 160,000 votes were cast in the March 6 Joint Primary Election in Bexar County. What is notable about this election is that nearly 56 percent of those were Democratic votes. It also was the first time in nearly a decade since Democrats outvoted Republicans in Bexar County early voting.

It was a record year for LGBT candidates with nearly 50 running statewide in races for congress, the state legislature, and positions in county and city government. In San Antonio, two local candidates were on the ballot vying for a Congressional seat, one as a Democrat the other as a Republican. A third candidate is running for a judgeship.

After the polls closed in Bexar County, the political junkies in the community gathered at Luther’s Cafe on the Maine Avenue Strip for an election watch party where several candidates made an appearance.

The ballot, one of the lengthiest in memory, included several candidates of particular interest to San Antonio’s LGBT community. One bright bit of news coming out the night’s election results was the first place finish of Lupe Valdez in the Democratic primary for governor.

Valdez, who grew up in San Antonio the youngest of eight children in a family of migrant workers, served four terms as Dallas County Sheriff. At the time when she was elected, she had the distinction of being first openly gay female sheriff in the state, and the only Hispanic female sheriff in the country.

Valdez scored 43 percent of the vote in a field of nine candidates. Her next nearest competitor, Andrew White, who she will face in the runoff election, received 27 percent. Gay Dallas businessman Jeffrey Payne came in 5th with five percent of the vote.

“I identify with a lot of Texans in many different ways and I think it’s just the time for change,” Valdez told those gathered at her election watch party in Dallas. “And I’m the one who has caused change before and I’m ready to do it again.”

“I am just really humbled that so many Texans who are ready for a change are giving me the opportunity to lead that change,” Valdez added. “We’re going to do more and work harder and we’re going to ask all these people to help us even more.”

Gina Ortiz Jones came in first in the Democratic primary for the District 23 Congressional seat, garnering 41 percent of the vote in a field of five candidates. In the runoff, she will face second place finisher Rick Trevino of San Antonio who got 18 percent.

Ortiz Jones, who grew up in San Antonio, served under Don’t Ask Don’t Tell while in the the Air Force and, according to her campaign manager, has always been quietly out. After serving in the Air Force, she pursued a career in national security, intelligence, and defense which included working for the Pentagon’s Defense Intelligence Agency and the Office of the U.S. Trade Representative.

“I’m grateful for everyone who voted for me, and to the countless more who have helped this campaign build a grassroots movement to put Washington back on the side of the people of Texas,” Ortiz Jones said in a statement. “I look forward to taking this movement to the runoff, and then to the general election.”

Rosie Gonzalez faced no opponent in the Democratic primary for Judge County Court at Law 13. She ran a lean campaign. “Signs, push cards do not vote, people do” she told Out In SA. “The campaign strategy focused on getting our message out to as many voters as possible before work, during lunch, on limited evenings and weekends.”

The strategy appears to have worked. Despite not having an opponent, Gonzalez received almost 70,000 votes in the primary, earning the the highest number votes of any Bexar County Court at Law candidate. By comparison, the Republican primary candidate for the same position, incumbent Crystal Chandler who also ran unopposed, received around 50,000 votes.

Mauro E. Garza, owner of Pegasus, a gay nightclub on the Main Ave. Strip, came in 15th in a field of 18 candidates in the Republican primary for the District 21 congressional seat. He received 657 votes.

Garza’s candidacy sparked something of a backlash within San Antonio’s LGBT community with many commenting on social media that it was something of a betrayal to Pegasus customers. As one Facebook post put it, “Hey everybody, here are your Sunday Funday dollars at work.”

Despite being a gay man, Garza made no mention of LGBT issues in his campaign. On his Facebook page he said did not wish to “force Americans to understand our [gay] culture and various subcultures or even to accept them” but to allow LGBT people “to exercise our freedoms within the parameters of the laws in this great nation.” Some of the best news for LGBT voters was the ouster of Democratic County Chair Manuel Media by political newcomer Monica Ramirez Alcantara, who received 67 percent of the vote, scoring almost two votes to every one Medina received.

Since he became the Bexar County Democratic Party chairman in 2012, Medina said he was a friend to the LGBT community. However, he played fast and loose with his allegiance when he ran for mayor last year by aligning himself with anti-LGBT Christians, the Tea Party and former District 10 Councilman Carlton Soules, a conservative Republican.

After not being endorsed by the Stonewall Democrats of San Antonio, Medina sent out a mailer in which he claimed the endorsement of the Bexar County LGBTQIA Democratic Caucus, a group whose membership consists of three friends who organized the group for the sole purpose of endorsing him.

Alcantara was endorsed by the Stonewall Democrats, former state Sen. Leticia Van de Putte, State Rep. Diego Bernal and state Rep. Ina Minjarez. She will be sworn in as party chair on July 3.

The runoff election is scheduled for May 22. Use this link to get more information about sample ballots, early voting and voter registration.

By Patrick Svitek, The Texas Tribune March 6, 2018 Lupe Valdez and Andrew White are on track for a runoff...