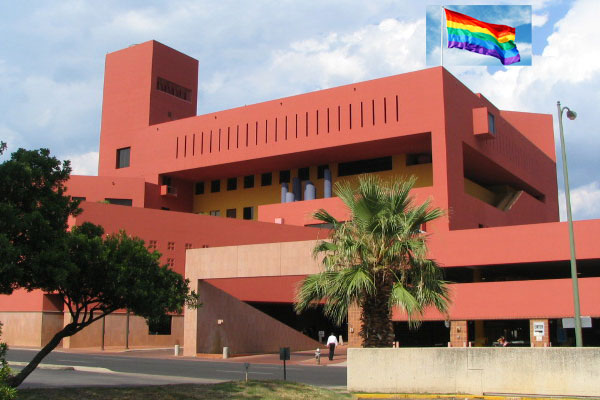 The San Antonio Public Library is hosting events during June in observance of Pride Month.

The San Antonio Public Library announced a list of events it is sponsoring in observance of Pride Month. This is the seventh year the library has presented such a series.

A statement on the library’s web site explains the aim of the June observance:

“The diversity of San Antonio goes beyond ethnic and racial lines, and twenty-first century libraries plan programs that appeal to a variety of people. Because of the variety, there is something for everyone. The Pride events planned in June are a part of the Library’s initiative to be relevant to a dynamic community and appeal to the many segments of a diverse city.”

Check out the library’s Pride resources at this link. Below is the schedule of this year’s Pride events.

Dr. Amy Stone of Trinity University will read from and discuss her new book, Cornyation: San Antonio’s Outrageous Fiesta Tradition. The book is the first history of this major Fiesta San Antonio event.

Dr. Stone’s book contains more than one hundred photographs and dozens of interviews. Cornyation has become one of Texas’ iconic and longest-running celebrations, and one of the Southwest’s first large-scale fundraisers benefitting local HIV service provides, raising more than two million dollars since 1990. Cornyation also sponsors scholarships for local college students who are majoring in theater arts.

In 2014, filmmaker Yoruba Richen gave a TED Talk titled What the Gay Rights Movement Learned from the Civil Rights Movement, which was filmed as a documentary of the same name.

As an African American and LGBT, Richen discusses the overlaps and tensions between the gay rights and the civil rights movements. She explores how the two struggles intertwine and propel each other forward and seeks to dispel a myth about their points of conflict. The screening will be followed by a discussion

Just a generation ago, it was adults, not kids, who changed genders. But today, many children are transitioning, too — with new medical options, and at younger and younger ages. In Growing Up Trans, this PBS Frontline documentary takes viewers on an intimate and eye-opening journey inside the struggles and choices facing transgender kids and their families.

Since its 2012 premiere at the Bonham Exchange, the annual Rey Lopez Birthday Bash has featured appearances by some of...