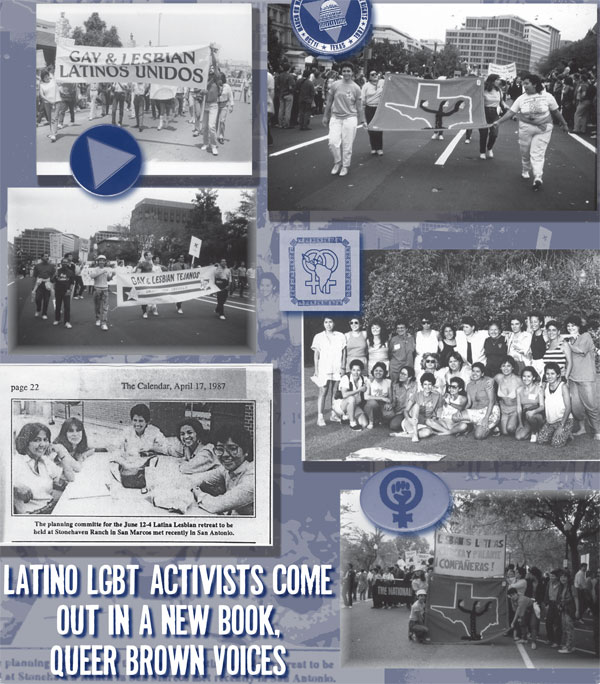 Photos of Latina/o LGBT groups document the role of Latina/o activists in the mainstream LGBT movement. Several contributors from the book Queer Brown Voices: Personal Narratives of Latina/o LGBT Activism will participate in a panel discussion on October 10 at the Esperanza Peace and Justice Center. (Photos from La Voce de Esperanza, October issue)

In Queer Brown Voices: Personal Narratives of Latina/o LGBT Activism, the new anthology from the University of Texas Press, fourteen writers from around the country document the often forgotten contributions of LGBT Latina/o activists in the LGBT movement.

On October 10, the Esperanza Peace and Justice Center will host six of the book’s contributors in a panel discussion and reading. Present at the event will be Letitia Gomez, Jesus Chairez, Luz Guerra, Dennis Medina, Gloria A. Ramirez and Brad Veloz.  The discussion will be facilitated by Dulce Benavides and Mike Rodriguez.

The press release for the event explains, “In the last three decades of the twentieth century, LGBT Latinas/os faced several forms of discrimination. The greater Latino community did not often accept sexual minorities, and the mainstream LGBT movement expected everyone, regardless of their ethnic and racial background, to adhere to a specific set of priorities so as to accommodate a ‘unified’ agenda.”

The book is composed of six chapters of first-person essays and eight chapters of oral history interviews. The manuscripts were edited by Uriel Quesada, Letitia Gomez and Salvador Vidal-Ortiz.

Four San Antonio authors are included in the anthology: Brad Veloz has written a chapter entitled, A South Texas Activist in Washington, D.C., Houston, and San Antonio; Gloria A. Ramirez’s contribution is titled, The Queer Roots of the Esperanza Peace and Justice Center in San Antonio, Texas; Letitia Gomez wrote, No te rajes Dont Back Down! Daring to Be Out and Visible; and Dennis Medina contributed, We Are a Part of the History of Texas That You Must Not Exclude!

In a review of book in the Texas Observer, Ashley Hope Perez writes,

A clear thesis emerges from the collected narratives: Queer brown experiences cannot be understood solely in terms of Latina/o identity or LGBT identity. Rather, the intersections between these identities shape both the discrimination that the contributors faced and their experiences with activism. Activist efforts represented in the collection include organizing support groups, facilitating consciousness-raising sessions, pursuing political causes, fighting discriminatory practices, performing cultural outreach, and translating AIDS treatment and drug information into Spanish. As represented in the collection, queer brown activism is a double-pronged endeavor, one that simultaneously works to increase acceptance within the Latina/o community and raise the profile of Latina/o concerns within the mainstream LGBT community.

Contributor Mona Noriega from Chicago, whose chapter is titled Creating Spaces to Break the Circle of Silence and Denial, told the Windy City Times in an interview, “This book is really about documenting that we did influence a larger movement, we were part of a larger movement.”

Being openly sensual with my body and my art can be challenging to some on both sides of the line,...