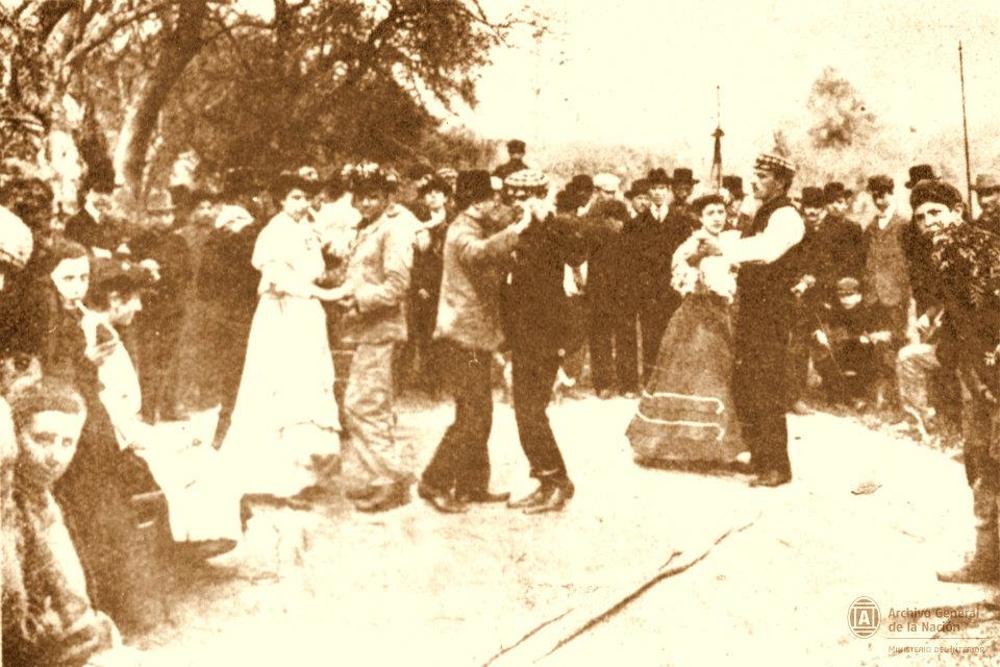 Seven years ago, Dancing With the Stars aired its first ever same-sex dance routine. After the celebrity’s dance partner had been injured, a male dancer stepped in during rehearsals so that time wouldn’t be lost waiting on the celebrity’s original partner, and somehow it was decided that the men would perform the dance they practiced together on air. They danced a Tango, referred to as a “mango” for two reasons: 1. same-sex couples are not very common within ballroom dancing (at least in the United States), 2. the Tango is a dance extremely dominated by heteronormative ideas of masculinity and femininity.

It wasn’t mentioned on the show, however, that the Tango was originally a dance performed by two men. Singer, songwriter, and Esperanza Peace and Justice Center artist-in-residence, Azul Barrientos plans to explore this aspect of the dance in July’s installment of her café-style performance series, Noche Azul. The theme of this month’s Noche Azul is A Night of Tangos, so I asked her about the origins of the Tango and the future of the dance.

She related the same-sex history of the dance, telling me that the Tango originated in Buenos Aires, Argentina during a time when women were scarce among the immigrant population. Tango music was “the music of the streets”, not the “kind of music that you’d have to go to in a specific place like now”, and so men “just danced among themselves.”

Christine Denniston is an author and dance teacher who has literally written books on the Tango. She delineates this same theory, asserting that the best way for a man to get close to a woman in Buenos Aires at the time was to see a prostitute or to go dancing. In order to get good at dancing, men tended to practice with each other, sometimes outside of brothels where live music was able to be heard. Denniston, who interviewed elderly men about their experiences dancing Tango, also asserts that later on in the Tango timeline, young men would attend male-only practice dances learning both the male and female parts of the dance, sometimes for months before attending an actual dance.

Despite the same-sex origin story of the Tango, the dance has always been based on traditional gender roles. Fortunately, the queer Tango movement exists to contrast the traditional heteronormative and machismo Tango. Instead of a passive woman being led by a man, queer Tango involves same sex couples and allows women to lead in both same-sex pairings and male-female pairings.

Barrientos summed up the dance’s trajectory, “Historically, it started like a coincidence but now it’s absolutely a movement. And in this show we’re definitely going to give it all the attention because it’s not only beautiful, it’s so interesting that young people appropriate something so culturally valuable to make it their own…It’s really interesting because there’s still tango…there’s always one that has to lead, but now it doesn’t matter what gender. They reinvent it with the leading role changing.”

Mariana Docampo of Tango Queer, explains the basics of the movement, “Queer Tango proposes the possibility for people that dance tango to freely choose the role they want to take up and what gender they prefer to dance with. To be able to perform this way, the teaching technique used is exchanging roles. This means for everyone to learn to lead and follow. Dancers have the power to choose to dance the role they prefer or to exchange roles, depending on the person they are dancing with and the moment they decide to do so.”

There have been queer Tango festivals around the world, and last February Austin held its own Tango Queer Week. But although the Tango is just one facet of the problematic gender binary as it can be applied to the world of dance, it appears that things are looking up. In 2009, the So You Think You Can Dance season five premiere featured a dance by two men that was met with criticism from judges who couldn’t make sense of a dance between two men. In 2014, there was controversy over allowing same-sex couples in amateur British dance competitions (it was argued that male couples would have an advantage in their greater strength). A month later, however, SYTYCD featured marriage equality themed routines by same-sex dance partners. Fast forward to 2015, and U.K. dance competition show Strictly Come Dancing is promising to feature a same-sex couple.

When asked about the future of queer tango, Barrientos was hopeful about the capacity of dance to spark progress, “I have seen in different countries how the ideas that were so centralized on gender have changed, and I think it’s a very intelligent way to connect people that recognize that archetype, and kind of reconnect the cables that society has on perception of gender…”

Noche Azul’s tango night will take place at the Esperanza Peace and Justice Center July 18 at 8 p.m. Musical performances by Aaron Prado, George Prado and Nina Rodriguez will accompany Barrientos in her exploration of the dance. Local “panza fusion” dance troupe Zombie Bazaar will also be performing. Admission is free, but a $5 donation to the center is encouraged.

When a longtime partner dies

A San Antonio man mourned the death of his loving companion of 25 years while simultaneously seeking the legal recognition...