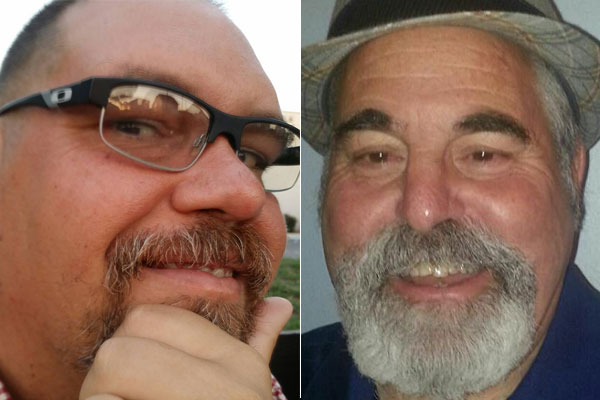 When Anthony Medina (left photo) died, Russ Colonmbo, his partner of 25 years, could not plan for his cremation because the State of Texas did not recognize their domestic partnership from California. (Courtesy photos)

A San Antonio man mourned the death of his loving companion of 25 years while simultaneously seeking the legal recognition needed to plan the burial.

Russell Colombo and Anthony Medina met and fell in love in San Francisco in 1990. They were so committed to each other that in 1993, they entered into a formal domestic partnership as authorized by the City of San Francisco and more recently by the State of California.

In 2012, the couple moved to San Antonio where Medina went to work at a local call center. Medina was the primary wage earner; Colombo stayed home because he suffers from a neurological handicap. Despite their modest homestead, the two lived peacefully with their dog, four cats and a chinchilla.

On March 29, Medina died suddenly and without warning, leaving Colombo with few resources or savings to take care of himself. There was nothing with which to cremate Medina who had no living relatives.

Complicating Colombo’s grief was the fact that the State of Texas did not recognize the domestic partnership agreement from California and therefore Colombo could not act as next of kin or legal representative.

“My client and his partner had been in a formal domestic partnership issued by the City of San Francisco for over 20 years,” says attorney Jonathan Sellers who took on Colombo’s case pro bono. “His partner died unexpectedly and, due to lack of means, my client wished to have him cremated so he could be returned and buried with his family in California.

In Texas, anyone can bury anyone but you have the approval of recognized kin to authorize cremation. The State of Texas would not recognize the domestic partnership, and the deceased had no surviving family who could be contacted to give the permission.”

Sellers appealed on Colombo’s behalf to the Bexar County Pauper Burial Services which handles funerals for the indigent. County officials conferred with the civil section of the District Attorney’s office and determined that given the lack of surviving kin, they would allow Colombo to make the “burial decision.”

Despite Bexar County officials’ approval, M.E. Rodriguez Funeral Home, the mortuary contracted to perform the cremation, went to the Texas Funeral Service Commission which determined the domestic partnership could not be recognized for purposes of authorizing the cremation. Colombo was told he needed a court order.

Sellers filed a petition to give Colombo permission to cremate Medina. In the petition, Sellers told the court the couple had health care directives in which they named each other. He said Colombo would assume legal responsibility for the cremation and asked the court to defer to the couple’s long time relationship as evidenced by the California domestic partnership certificate.

On May 18, the court approved the petition. After six weeks of legal obstacles, Colombo was finally given permission to cremate his partner of 25 years and arrange for the burial of his ashes.

It was a sad victory. Colombo was left in a dire situation. After the state learned that Medina had died intestate and with no legal heirs, officials came to the couple’s apartment and seized all property that belonged to the deceased.

Since Medina was the the primary wage earner, Colombo had to move into a smaller apartment with a roommate and had to give up for adoption three of his cats and the chinchilla. Sellers placed the pets in welcoming homes.

“It’s been a bad experience,” Colombo told Out In SA. “We were a good couple until misfortune happened.” He wants to move back to California to be close to his family but frets he may not have the necessary funds.

“This episode perfectly demonstrates just how harmful the discriminatory laws of states like Texas are to families, denying dignity and equal protection under the laws to committed same-sex couples,” says Sellers. “Even after same-sex marriage is legalized, it will still be important for same-sex couples, and all individuals, to get estate planning in place.”

“I am very thankful to Bexar County civil servants who were very sympathetic to my client’s position and did everything they could to help,” he adds. “This case reaffirmed why I wanted to be a lawyer in the first place . . .”

This article was originally published in Out In SA’s June print issue.

Country days and drag nights on the South Side

They would eat tuna-fish sandwiches with watermelon by the river until it was time to go into the bar and...