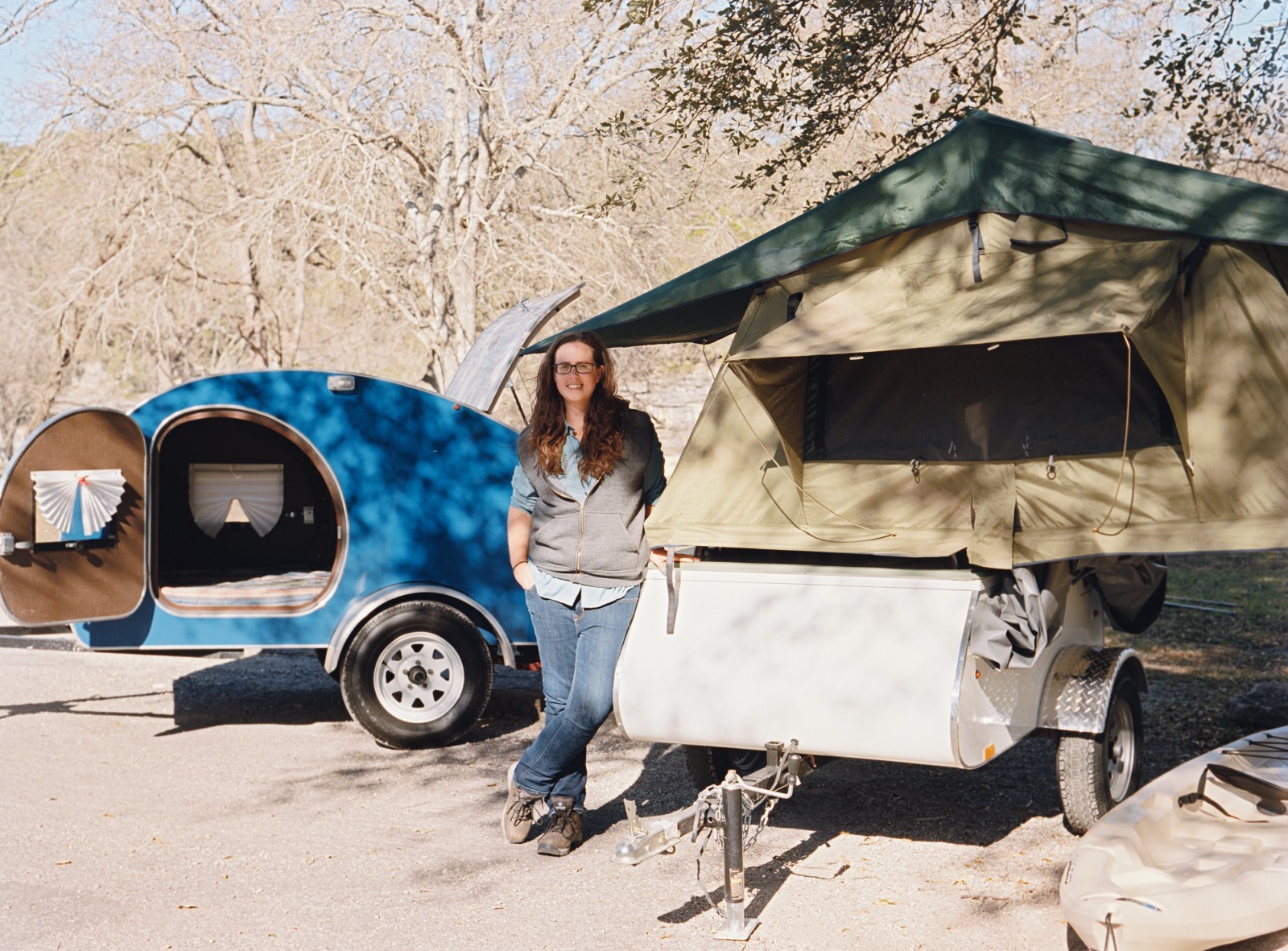 Emily Pease photographed in Guadalupe State Park for Out In SA

The weather outside is perfect, and Emily Pease is sitting in a fold-out chair in Guadalupe State Park with a water bottle in hand. Behind her is a brightly colored teardrop camper trailer she recently finished setting up.

Emily is well aware of the benefits the great outdoors offers camping enthusiasts. For her, camping isn’t simply an occasional weekend outing; it’s a major part of her life. “It’s really one of the best things you can do for your soul and mind,” she says.

In 2012, when Emily’s father Ron first built the family a teardrop camper, they were quick to recognize it as a possible business venture. “I just realized how awesome they were, how lightweight they were, and how more people really needed them in their lives,” Emily says. “There weren’t really any companies in Texas that were manufacturing them.”

In March 2015, Ron founded Armadillo Camper Kits — a family business that’s been steadily growing ever since. Together, Emily and her parents build custom teardrop camper trailers and tent trailers. They also make them available as rentals, or customers can buy kits to build the campers themselves. The campers are meant to be lightweight and easy to assemble, features the family considers major selling points. Each model takes its name from a Texas town or theme. For example, there’s the Goliad Teardrop, the Bandera Teardrop and the Roadrunner Adventurer.

Essentially, teardrop camper trailers are streamlined, art deco-style travel trailers that fit a full-size mattress inside and usually include a chuck-wagon kitchen in the outside rear. First introduced in the 1930s, teardrop campers were often featured in Mechanix Illustrated magazine. They could be seen hitting the roads up until the early 1960s, when manufacturers halted production. With the advent of the internet in the 1990s, some of the original plans for teardrop campers became available for the world to rediscover. In the late 2000s, with gas prices on the rise, the need for compact and fuel-efficient vehicles sparked a resurgence. Today, teardrops are available for purchase from small workshops and custom builders around the country. During the course of our meeting, two curious individuals, lured by the attractive campers parked nearby, interrupt us. Emily is quick to point out all of the special features and details for the potential customers. This sort of thing happens all the time.

She hopes to convince the masses as to why they should purchase a teardrop camper. Among the selling points: It helps bring people together, especially families.

“When we stay home for the weekend, everyone is really engaged with their phones and computers and televisions, but when you go out to nature, and you’re with your family, you don’t have any of those things to fall back on,” she says. “So you’re kind of forced to interact with everyone and you get to know everyone more. We’ve really lost a lot of that human connection, especially with our own families. When you have the opportunity to unplug your mind, you’re able to connect back on a conscious level to your own family members, and anyone else that you go out into nature with, including yourself.”

Emily’s mission to spread awareness of nature and the great outdoors doesn’t end with her family business. She hopes to start a nonprofit called “Little Feet, Big Adventures” that will take kids (who otherwise wouldn’t get such experiences) on camping trips. She mentions LGBT kids, for example, who may not always be comfortable sharing those experiences with other kids. She cites the lesbian cycling and youth outreach program LezRideSA as a model for the sort of community involvement she’s interested in. Last year, she donated two free nights in one of the family’s rental campers to the winner of LezRideSA’s Dance-A-Thon fundraiser.

Emily also hopes to see millennials enjoying the outdoors more. “Eventually the national parks and state parks are going to be our responsibility, and if we’re not teaching people why nature is important, and how important it is, then it’s something we could lose control of entirely,” she says.

For now, Emily has been learning everything she can from her father, who taught her about rentals, manufacturing and all the details involved in a family business. When her dad retires in the next few years she hopes to take over the business.

“My ultimate goal is to help people get back to nature,” she says. “To help people heal themselves and to try to combat depression and anxiety in our society by teaching people to disconnect from technology every once in a while.”

Activists from seven different community organizations are planning to picket Texas Governor Greg Abbott during his "Broken But Unbowed Texas...