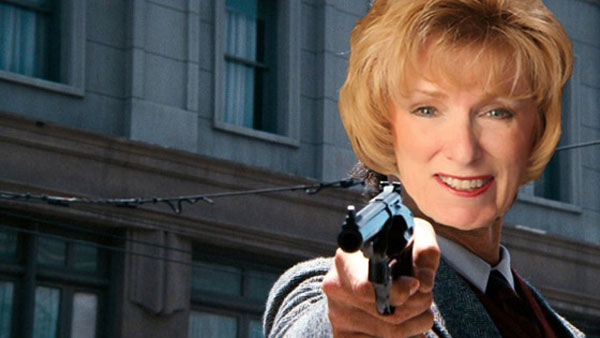 Bathroom police: State Representative Debbie Riddle's introduced a bill that would fine and jail transgender people who use the "wrong" public bathrooms in Texas. (Via Houston Press)

Texas state Rep. Debbie Riddle (R-Tomball) has filed House Bill 1748 that would make it a misdemeanor for a transgender person to use a public restroom that matches their gender identity and would punish business owners who would allow them to do so.

Punishment for breaking Riddle’s bathroom law would be up to one year in jail and a fine of up to $4,000 for trans people who use “a locker room, shower facility, or toilet facility designated for use by persons of a gender that is not the same gender as the individual’s gender.”

Building owners or superintendents who allow trans people to use the restroom of their choice could be fined up to $10,000 for allowing them to do so.

The bill go so far as to define male and female genders so there is no confusion as to who can use which restroom:

On January 13, Riddle posted on her Facebook page, “This is the 1st day of our Legislative Session here in Texas. I am rolling up the sleeves of my new red dress & getting to work. I have several bills I think you may like. One will protect women & children from going into a ladies restroom & finding a man who feels like he is a woman that day.”

In 2012 Riddle introduced a bill that would have allowed teachers who have a concealed handgun license to carry the weapon in to their classrooms. “The bad guys will always do what it takes to get their guns & do their evil deeds. When we make our schools “gun free zones” we let the people who want to hurt our children know they are easy targets,” Riddle said at the time.

Ana Alicia Perez says she's often asked what possessed her to turn her annual birthday party into a fundraiser. Her...