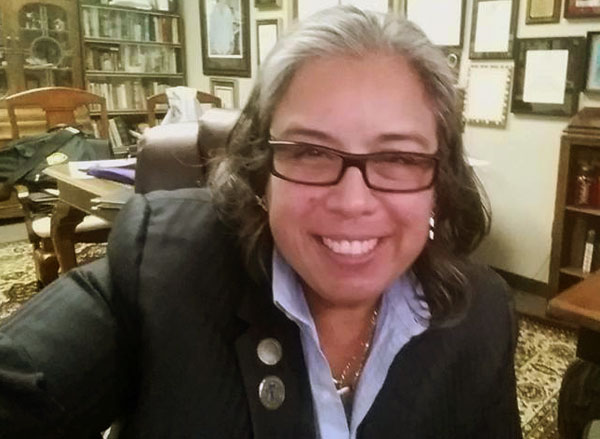 San Antonio lawyer Rosie Gonzales has been hired as city attorney for the City of Von Ormy, Texas. (Courtesy photo)

Gonzalez is a native of Brownsville who has lived in San Antonio for almost 30 years. She attended St. Mary’s University where she earned her Bachelor of Arts in Political Science and later her law degree. She has a family law practice and is a graduate of the Women’s Campaign School at Yale University.

Last year, Gonzalez ran unopposed for Judge County Court at Law No. 13 in the March primary and was the only Democratic LGBT candidate who ran for office in the November 4 election. She lost her bid in the race against Republican Crystal Chandler.

Gonzalez told Out In SA she was encouraged to seek the city attorney job. “I applied for the position after I was asked by a number of Von Ormy citizen’s to do so as a way of assisting them with their current municipality growing pains, many of which have been publicized in our local media outlets.”

She says she interviewed with the Von Army City Council on February 4. “I was one of four applicants to interview for the position and was the only woman to do so. That same night, the council voted 3 to 2 to hire me as their new city attorney. My contract was approved on March 4 by a city council by a vote of 3 to 1.”

Prior to its incorporation in 2008, Von Ormy, with a population of about 1000 people, existed under San Antonio’s extraterritorial jurisdiction.

According the city’s web site, during the Spanish colonial era, Von Ormy (then known as Paso de las Garzas) sprang up along the natural crossing point of the Medina River on the Camino Real between San Antonio and Saltillo. In 1886, the city changed its name to Von Ormy in honor of Prussian Count Norbert Von Ormay who moved to the city that year.

Gonzalez says the job started immediately after the council vote. “As city attorney for Von Ormy, I will be on duty on an on-call, as needed basis to answer questions for the city and city council pertaining to legal issues and to assist them in averting liabilities and law suits stemming from their actions or omissions.”

The position is part-time which allows Gonzalez to continue her full-time law practice in San Antonio.

State Rep. Jason Villalba (R-Dallas) announced on March 9 that he has "reconsidered" filing a bill he authored (HJR55) that...