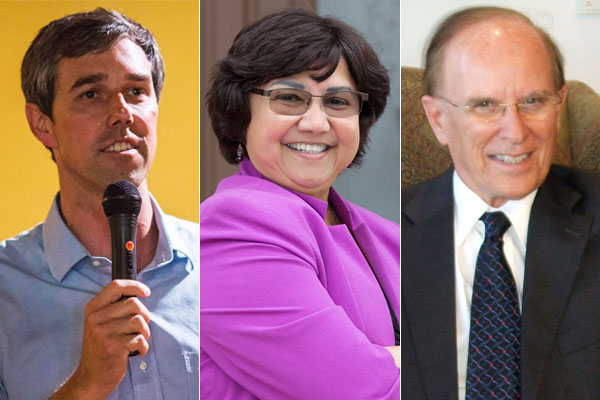 Candidates in the March 6 Democratic Primary will vie for endorsements from the Stonewall Democrats of San Antonio at their candidate forum on January 28. Pictured are: Beto O'Rourke, candidate for U.S. Senate; Lupe Valdez, candidate for Texas Governor; and Nelson W. Wolff, who is running for another term as Bexar County Judge. (Photos via Facebook. Nelson Wolff photo by Sam Sanchez)

The Stonewall Democrats of San Antonio announced their candidate forum and endorsement meeting will take place on Sunday, January 28 in the Trinidad Room at the El Tropicano Hotel.

The purpose of the forum is to hear from candidates who are running for office and to vote on endorsements. The meeting is being held ahead of the Democratic Primary which is slated for Tuesday, March 6.

Stonewall’s endorsement lists have for years served as an important resource for voters in the LGBT and allied community.

This year’s primary presents a challenge to Bexar County voters who must cast ballots on scores of races including governor, U.S. senator, congressional seats, state house and senate seats, numerous judgeships, county commissioners, county judge, district attorney and a board of education seat.

Some races offer a crowded roster of candidates. As an example, there are ten Democrats running for governor, five for U.S. senator, five for the District 23 congressional seat, and four for the District 21 congressional seat. There are so many judgeships on the ballot that the local LGBT LULAC chapter recently hosted a presentation to help voters understand the function and purpose of each court.

Stonewall has sent invitations to all the Democrats running in the primary. To be eligible for an endorsement, candidates must fill out a questionnaire and appear at the forum to make a short presentation and answer questions from Stonewall members.

While guests are welcome to attend the forum and hear candidates, only members may stay for the endorsement meeting.

The last day to register to vote in the March primary is February 5. Early voting begins on February 20 and ends on March 2.

Stonewall Democrats of San Antonio Candidate Forum and Endorsement Meeting, Sunday, January 28 at 1 p.m. in the Trinidad Room at the El Tropicano Hotel, 110 Lexington Ave. Complimentary self-parking based on availability at hotel. Overflow parking along street — pay parking lot across street from hotel. Attendees are invited to join us from noon to 1 p.m. for a $10 per person lunch buffet at the hotel’s Mango Restaurant. Half-price drinks and appetizers will be available at the Tiki Bar.

A new one-woman show that draws from the real life of actress Bette Davis will hit the stage of the...