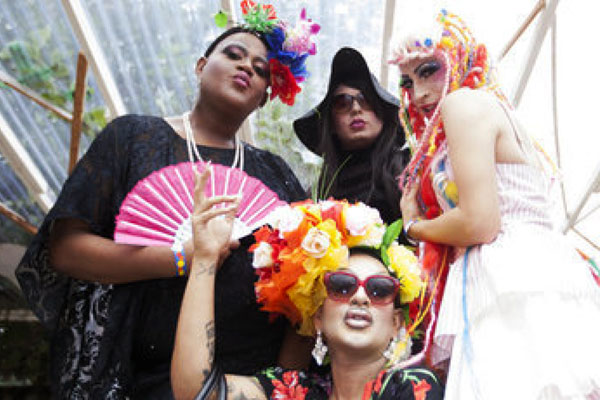 "Sisters of the Wicked Wig" is one of thirteen feature films and 35 short features to be presented at QFest 2016: The San Antonio LGBT International Film Festival which begins on October 13. (Courtesy photo)

When QFest 2016, San Antonio’s LGBT International Film Festival, opens on October 13, it will present four days of features and short films which reflect the unique diversity of LGBT life.

First started in 2013, QFest is produced by Pride San Antonio. Organizers says the festival is held during LGBT History Month “in order to promote the understanding and multicultural community that is the LGBT community.”

QFest will unfold on two screens at Brooks City Base Cinema, 2623 SE Military Drive. Thirteen feature films and 35 short films make up the 2016 offerings. (Click here for an entire list of films and descriptions.)

“This year we have endeavored to do something a little different. We are a festival of filmmakers, for filmmakers. We have enabled the entrants to receive their score sheets from the judging round. This is a very rare this for film festivals, but we wanted to have this available so that the filmmakers could know how to improve their craft,” festival director, Sean P.Wise, said in a statement. To that end, the festival will present several awards on the final day.

Following are descriptions and trailers for the 13 feature films to be presented at QFest 2016.

Sisters of the Wicked Wig (2014)
Directed by Adam Golub and Gayatri Kaul
Screen A, Thursday, October 13, 2016, 8:10 p.m.
Two experimental drag queens create the Bushwig Festival that celebrates the richly unconventional Brooklyn queer community amidst the harsh realities of a rapidly-gentrifying New York City. Sometimes best friends, sometimes bitter enemies, the two contend with issues of family acceptance, financial stability, and the conflicts and contradictions that arise within their community of outsiders.

Game of Checkers (2015)
Directed by Patrícia Sequeira
Screen B, Thursday, October 13, 2016, 4:40 p.m.
Following Marta’s wake, her five best friends decide to spend the night at a rural tourist getaway that Marta never got around to opening. That long night becomes a maze-like journey through their interconnecting friendships, where each reveals herself as if it was the last day. On the eve of the burial, the talk is about life and a friendship that survived it all. But will this friendship be able to survive death?

Queer Moxie (2014)
Directed by Heather Provoncha and Leo Hollen, Jr.
Screen B, Thursday, October 13, 2016, 7:50 p.m.
Featuring comedians, drag kings and queens, spoken word artists and burlesque dancers, Queer Moxie is a behind the scenes look into queer performance art from the fringe to the mainstream. By showing out and dreaming big, queer artists have entertained and inspired audiences, once not able to see themselves onstage. Featuring interviews, archival and performance footage, Queer Moxie presents a glimpse of those that have queered the stage and ignited social change.

Gender Troubles: The Butches (2015)
Directed by Lisa Plourde
Screen A, Friday October 14, 2016, 4:20 p.m.
Contrary to the stereotype, butch lesbians aren’t trying to be feminine and failing. They are not going through a rebellious stage or imitating men. Rather, they are women who while being true to their own selves, may look and or act in ways that society has decided is appropriate only for men. And some people have a problem with that. The women portrayed in this film examine and challenge society’s assumptions about what it means to be female.

The Jumper Maybach Story (2015)
Directed by Alan De Herrera
Screen A, Friday October 14, 2016, 8:10 p.m.
Texas-born Ben Workman was pushed to the breaking point after a lifetime of discrimination and bullying. Until one day, something magical happened: Ben experienced an awakening that would change his life in a profound way. Enter Jumper Maybach, clown personae and abstract painter, alter ego of Ben Workman. Through his newfound freedom of expression, Jumper uses art to spread his message of universal love and acceptance. This is the inspiring story of how one man finds the courage to fight for equality in the face of overwhelming adversity and, along the way, discovers his true identity.

Dark Horse Candidate (2015)
Directed by Liss Platt
Screen B, Friday October 14, 2016, 5:00 p.m.
A queer daughter uses her conservative father’s unofficial candidacy for President of the United States as a pretext for making a documentary about him. What starts as a portrait of the ‘candidate’ quickly morphs into a more personal reflection on the film maker’s father, their complicated relationship, and the consequences of family legacies.

Clambake (2015)
Directed by Andrea Meyerson
Screen B, Friday October 14, 2016, 7:50 p.m.
An exciting new documentary from award-winning filmmaker Andrea Meyerson charts the growth of Women’s Week in Provincetown, from its inception to becoming the thriving lesbian mecca it is today. The film takes viewers on a fascinating 30-year journey, through archival footage and archives, interviews with celebrities and founders, and current events and performances, offering a historical—and hysterical—look at what a handful of innovative women can accomplish.

Faux Paws (2013)
Directed by Doug Bari
Screen A, Saturday October 15, 2016, 12:20 p.m.
Gay werewolves Brian and Doug escape from a lycanthrope reservation to seek freedom in Maine, the only state with a sanctioned tolerance of werewolves. Hide your meat and cheese. Werewolvin’ ain’t what it used to be.

What’s The Matter With Gerald? (2016)
Directed by Matt Riddlehoover
Screen A, Saturday October 15, 2016, 5:20 p.m.
A hypochondriac irks his partner by embracing the advice of an eccentric healer.

Unimaginable (2015)
Directed by Cedric Thomas Smith
Screen B, Saturday October 15, 2016, 5:20 p.m.
“How much does love have to hurt before it is not love?” is the question that plagues Antonio as the past demons of domestic violence resurface at the hands of his partner, Kirk. Antonio hides his physical and emotional pain from his all-knowing mother, Cynthia, who suffered such a tremendous amount of abuse at the hands of Antonio’s father that Antonio became a nurse to heal pain that he could not heal as a child.

Upstairs Inferno (2015)
Directed by Robert L. Camina
Screen A, Sunday, October 16, 2016, 12:20 p.m.
On June 24, 1973, a gay bar in New Orleans called the Up Stairs Lounge was deliberately set on fire: an event which held the title of “Largest Gay Mass Murder in U.S. History” for 43 years. (This film is only available with the San Antonio QFest 4-Day All Access Pass)

Major! (2016)
Directed by Annalise Ophelian
Screen B, Sunday, October 16, 2016, 12:20 p.m.
Major! follows the life and campaigns of Miss Major Griffin-Gracy, a 73-year-old black transgender woman who has been fighting for the rights of trans women of color for over 40 years. (This film screening is only available with the San Antonio QFest 4-Day All Access Pass.)

Tickets to QFest 2016 are sold in blocks by the day (Screen A or B). Each block can be purchased individually for $20 dollars each. Entire 4-day package is $50. Each block contains a feature and several short films. Seating is limited by theater size. Total seating for each theater is 187 people. Priority will go for 4-day pass holders versus single block tickets. Click here for information and to purchase tickets.

Texas Man Found Guilty of Shooting Lesbian Couple, Killing One of Them

David Malcom Strickland has been found guilty of sexually assaulting a lesbian couple, shooting them, killing one of them and...