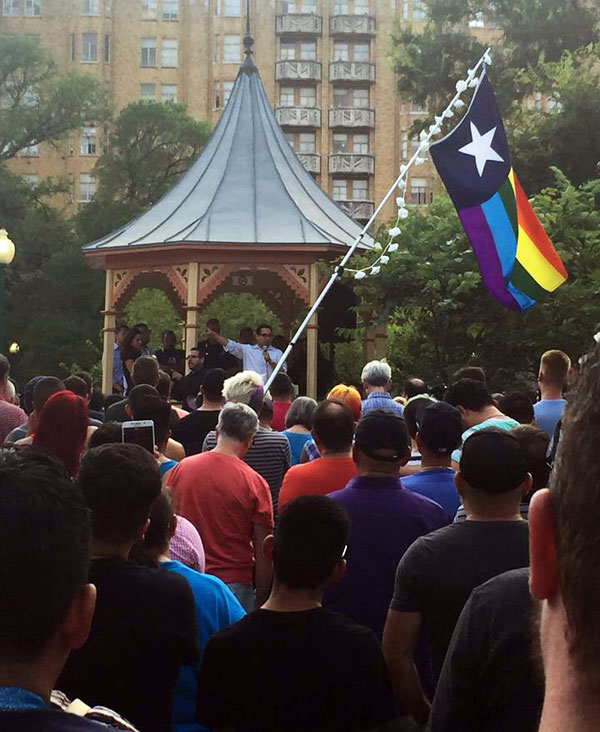 Around 300 LGBT San Antonians and their allies came out to show their solidarity in the wake of the shootings at the Pulse dance club in Orlando, Florida. Also present at the vigil were Congressman Joaquin Castro and his brother Secretary of Housing and Urban Development Julian Castro who stood in the crowd but did not offer any public comments. According to Joey Palacios of Texas Public Radio, Julian Castro was in town for a speaking engagement. Following the vigil in Crockett Park, the crowd walked in a candlelight procession to the parking lot at Sparky’s Pub for a rally where more speeches were given.

Missing from the evening was District 1 City Councilman Roberto Carlos Trevino whose district includes the Main Avenue Strip and the largest number of LGBT neighborhoods in the city. Earlier in the day, the councilman had posted to Facebook, “Let love triumph over these despicable acts. Pray for peace, love and understanding. Pray for Orlando.” Across town at Beacon Hill Presbyterian Church during Dignity San Antonio’s weekly mass, a table was set up with 50 rainbow ribbons symbolizing the victims of the shootings in Orlando.

Another vigil will be hosted by Pride Center San Antonio on Thursday, June 16 at 7 p.m. at the gazebo in Crockett Park, 1300 N. Main Ave. “to unite in prayer for the victims of this horrific tragedy.”

Check out our slideshow of Sunday’s vigil and rally.