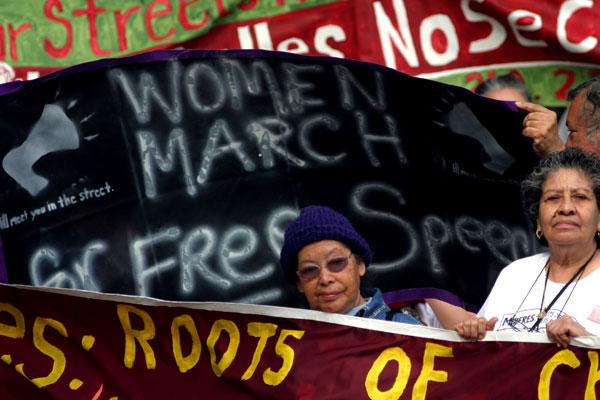 The annual San Antonio International Woman’s Day March and Rally, slated for Saturday, March 3, historically addresses a wide range of issues, and this year is no exception.

In a statement, organizers of this year’s event say they are coming together to “make positive social change” for people who have been the targets of racist, classist, homophobic and sexist attacks.

“We seek healthcare, environmental justice, housing, education and fair wages not just as women, but also as people of color, as youth and elders, as immigrants and indigenous people, as lesbian, bisexual, intersex, two-spirit, transgender and queer women, and as poor and working class people,” their vision statement emphasizes.

By bringing together diverse groups of women, including transgender and gender queer people, march organizers are helping build an understanding of interconnected issues and their effects on women and girls.

This year’s march logo was designed by artist Suzy Gonzalez.

Now in its 28th year, the theme of this year’s march, “We Are The Ones We’ve Been Waiting For!” (¡Somos A Quien Estábamos Esperando!), emphasizes that the women of San Antonio are like women and girls all over the world who serve as “the voices of conscience, the roots of change and the leaders of local and global movements.”

The march begins at Columbus Park with a blessing and ends in Milam Park with a rally featuring speakers and performers.

March organizers have scheduled a banner-painting and t-shirt screening party on Saturday, February 24, from from 10 a.m. to noon at the Esperanza Center for Peace and Justice. The posters and signs will be used at the march the following weekend. The party will also serve as a platform to show the group’s support of Planned Parenthood of South Texas.

For those interested in helping create larger signage, artist Suzy Gonzalez, who designed this year’s march logo, is inviting volunteers to a banner painting workshop on Thursday, March 1 from noon to 3 p.m. at Movement Gallery/Galería Movimiento, 1412 E. Commerce St.

28th Annual San Antonio International Woman’s Day March & Rally, Saturday, March 3, 2018. Marchers will gather at 10 a.m. at Columbus Park, 799 W. Martin St. There will be a Blessing at 10:30 a.m. and the march steps off at 11 a.m. Free parking is available at the UTSA Downtown Campus which does not require a permit in Lot D3, under 1-35 / 1-10 highway. Check out the march’s Facebook event page for more information.

Drag Race All Stars Team Up in SA for ‘Haters Roast’

Originally published in the San Antonio Current. When it was announced that RuPaul’s Drag Race would make a switch to...