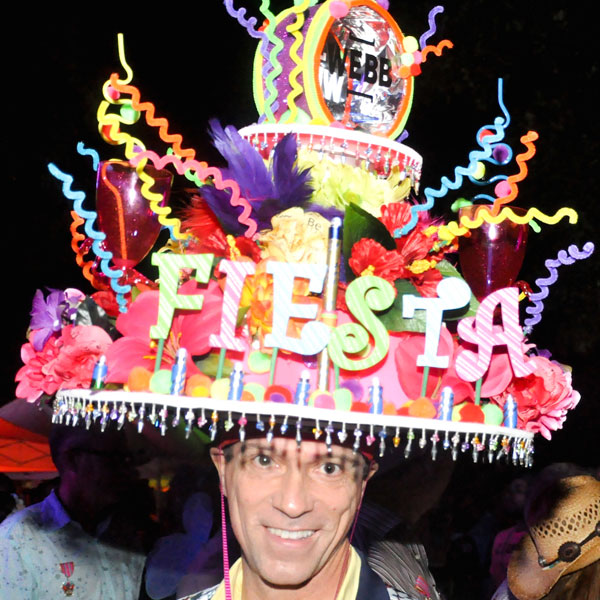 An enthusiastic participant at the 2015 Webb Party (Photos by Julian P. Ledezma)

After a year-long hiatus, the San Antonio AIDS Foundation announced the return of the WEBB Party on April 21, 2017 as an official Fiesta San Antonio event to be held at the historic Bonham Exchange nightclub. As one of SAAF’s signature fundraising events, the WEBB generally attracts over 1,500 guests and helps raise over $100,000 annually for the foundation’s client services including free HIV testing and hot meals program.

“We are excited to share this news,” SAAF president Cynthia Nelson said in a press release. “We are equally excited to partner with the iconic Bonham Exchange to bring WEBB back to its colorful, alternative roots in the San Antonio community. All of us are dedicated to making WEBB an unforgettable extravaganza that will not only raise money for the San Antonio Aids Foundation, but also raise awareness of the fact that HIV/AIDS remains a serious public health problem in our community and that we must continue to fight the good fight. WEBB is a perfect way to both educate and entertain.” First held in the early 1990’s, the fundraiser’s popularity has spurred its growth over the years and in 2004 WEBB became an official Fiesta event. According to local legend, the WEBB’s name is inspired by an Ethiopian proverb: “When spider webs unite, they can tie up a lion.”

Check out our slideshow from the 2015 Webb Party.

General admission tickets for the WEBB Party are $75 pre-sale and $90 on the day of the event. Ticket sales begin March 24 at the Fiesta Store, 2611 Broadway.

As the world sat around their television sets watching coverage of the 2016 presidential election on Tuesday night, local artist...