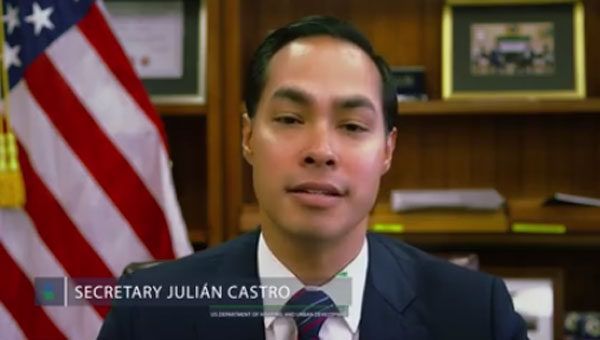 Secretary of Housing and Urban Development and former San Antonio Mayor Julian Castro is taking to social media with a video in support of HUD’s Gender Identity Rule which was proposed on November 20, the Transgender Day of Remembrance.

In the short video, Castro says, “Everyone deserves to live with dignity regardless of their gender identity. That’s why HUD is taking action to give everyone access to our services, benefits and accommodations.”

According to information provided on the HUD web site, the new rule “would require recipients and sub-recipients of assistance from HUD’s Office of Community Planning and Development (CPD), as well as owners, operators, and managers of shelters, buildings, and other facilities and providers of services covered by CPD’s programs, to provide transgender persons and other persons who do not identify with the sex they were assigned at birth with access to programs, benefits, services, and accommodations in accordance with their gender identity.”

In 2012, HUD enacted the Equal Access Rule which requires “HUD-assisted and HUD-insured housing be made available without regard to actual or perceived sexual orientation, gender identity, or marital status, and which generally prohibits inquiries into sexual orientation or gender identity for the purpose of determining eligibility for such housing or otherwise making such housing available.”

At the time, the Equal Access Rule did not address how transgender persons are accommodated in temporary shelters where there are shared sleeping quarters or shared bathing facilities. The proposed Gender Identity Rule corrects that omission.

At the top the HUD LGBT web page a quote from Castro says, “HUD is committed to fighting unjust discrimination and to expanding housing opportunity for all. We believe there are no second-class citizens. And I will do every single thing that I can to make sure that everyone is protected.”