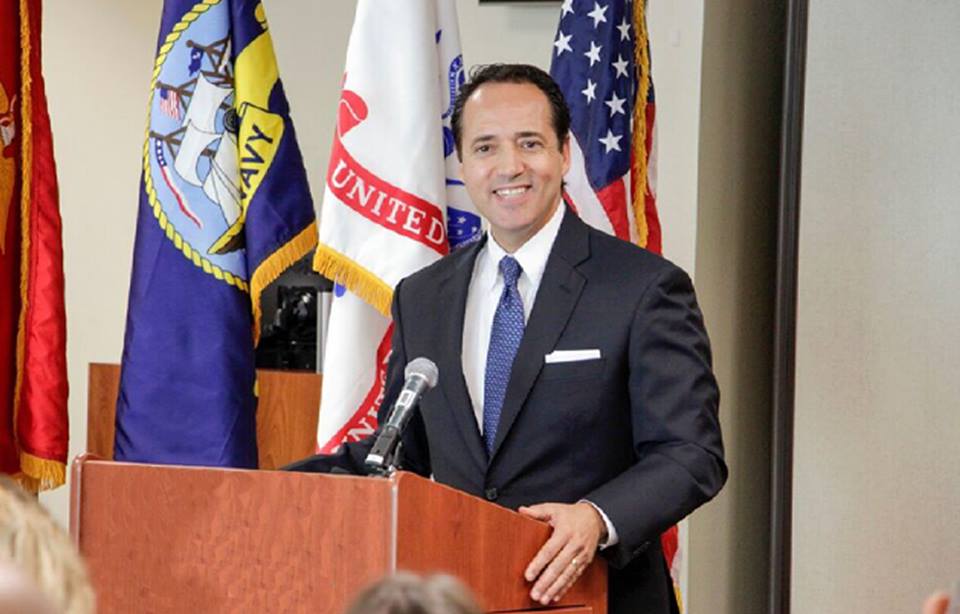 State Senator Jose Menendez was honored with the Political Advocacy Award from the Stonewall Democrats of San Antonio. (Photo courtesy of @Menendez4Texas)

On September 24, the Stonewall Democrats of San Antonio honored state Senator Jose Menendez with the Political Advocacy Award, which is given annually to “an elected or appointed official who has made significant contributions toward the advancement of equality for LGBT persons at the local, state or national level.” The award was presented at Stonewall’s annual banquet.

Menendez was elected to the Texas Senate in 2015 to replace Leticia Van De Putte, who left the position to run for mayor of San Antonio. Prior to his time in the senate, Menendez served in the Texas House from 2001 to 2015. He is seeking another Senate term in the November 8 election.

Long-considered an ally, Menendez has worked to advance legislation that is beneficial to the LGBT community. Recently, Equality Texas named him one of the top five senators on LGBT issues.

In April 2015, Menendez worked to help prevent the passage of Senate Bill 2065, an anti-gay marriage bill that allows clergy and ministers to deny marriage services if doing so violates “a sincerely held religious belief.” Despite the efforts of Menendez and others, the bill passed.

Menendez also co-authored Senate Joint Resolution 13 to repeal the amendment in the state constitution that prohibits same-sex marriage, a law that remains on the books despite the Supreme Court’s landmark ruling in Obergefell v. Hodges.

Congratulations on receiving the Political Advocate Award from the Stonewall Democrats of San Antonio. What was your reaction to hearing the news?
It was incredibly humbling to receive the award. My role as a legislator is to give voice to the people of San Antonio. This city is blessed with a vibrant LGBT community, and I’m grateful they feel represented. One of the most exciting days as an elected official was when the Supreme Court ruled on marriage equality. At the time, our Senate office was located in the courthouse so we held a little reception and handed out congratulations certificates to all the couples that got married that day. It was so moving to hear the stories of couples who had been together for 40 years and they were finally getting married.

With the new year just around the corner, what do you see as the top priorities for the coming legislative session?
Passing David’s Law to prevent and combat cyberbullying is going to a major initiative. I’m also going to prioritize the same issues I have been championing. I want to make sure our teachers get a pay raise and more money is put into the classroom. Texas needs to recognize the rights of every citizen and that every citizen has equal protection under the law. Building a 21st-century transportation infrastructure is key to the millions of people who drive and call San Antonio home.

Can you explain how David’s Law would work?
Texas laws need to keep pace with evolving technology. David’s Law will empower school administrators and law enforcement to go after and reprimand the bullies who prey on students, while focusing on rehabilitation. David’s Law will prevent and combat bullying in schools through several measures. It will require school districts to include cyberbullying policies in their district policies on bullying and notify parents if their child has been the victim of bullying or is the alleged aggressor. It will require school districts to develop a system to anonymously report bullying and threats. It will give school districts the ability to investigate bullying off campus if it materially affects the school environment and it will allow schools and law enforcement to collaborate on investigations. It will give school districts greater latitude to place students in a disciplinary alternative education program or to expel students for certain very serious bullying behavior, such as coercing a child into committing or attempting to commit suicide. It will allow law enforcement, through subpoenas, an increased ability to unmask anonymous social media users who send threatening messages or make threatening posts. It will make it a misdemeanor to electronically harass or bully anyone under the age of 18 through text messages, social media, websites, apps or other means. This section was modeled after Gracie’s Law in Maryland. It will focus on providing additional counseling and rehabilitation services to the victim and the aggressor.

In July, the U.S. 5th District Court of Appeals found that Texas’ voter identification law violates the U.S. law prohibiting racial discrimination in elections. While the voting regulations will not change for now, Texas Attorney General Ken Paxton said he plans to appeal the ruling to the Supreme Court. Do you think his efforts will be successful?
No. He will not be successful. Moreover, the millions of dollars spent defending this unconstitutional law could have helped shore up Child Protective Services, replaced textbooks for Texas classrooms, or helped thousands of indigent seniors. I’m calling on General Paxton to stop chasing windmills and face the reality that this law discriminates against voters. It’s all money flushed down the toilet on a “solution” looking for a fictitious problem.

San Antonio civic leaders are concerned that Texas Republicans could enact new anti-LGBT laws in the 2017 session of the state legislature which would stifle the ability to attract events like the NCAA Final Four basketball tournament, which the city is scheduled to host in 2018. Do you think Democrats will be able to block such legislation?
In North Carolina, we have seen the ramifications of passing discriminatory legislation.  According to the Center for American Progress, North Carolina could see a loss of approximately $500 million in economic activity. Texas cannot afford to pass these types of damaging laws. San Antonio would be particularly impacted because a large segment of our economy is generated by tourism. The NBA [moved] their All-Star game [from] Charlotte, North Carolina. If Texas passes legislation it could lead to the end of major sporting events and major employers moving to this state. Fortunately, I think we have a unique political alliance built to defend against legislation that discriminates against the LGBT community. Business leaders, local elected officials, and Democrats are all united to defeat these bad laws that have no place in Texas.

The Houston Press is reporting that a Houston judge who was formerly a Republican announced he is now a Democrat,...