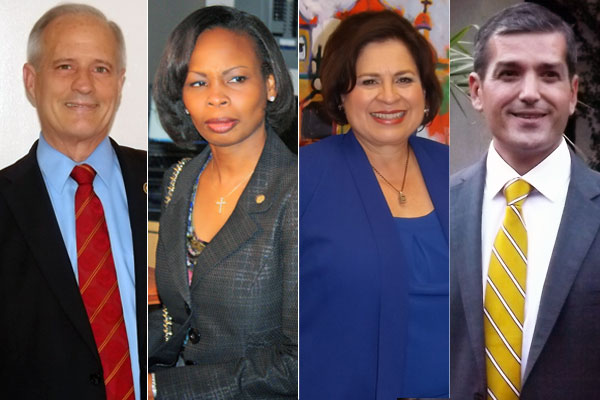 Candidates for mayor, City Council and school boards will vie for endorsements from the Stonewall Democrats of San Antonio at their candidate forum on March 22. (Photos by Sam Sanchez. Ivy Taylor photo by WalkerReport.com)

Members of the Stonewall Democrats of San Antonio are busy planning for the group’s candidate endorsement forum slated for Sunday, March 22.

The forum will be the first for newly-appointed co-chairs Carolee Moore and Vincent Enriquez. Moore is a retired licensed clinical social worker who went back to school and now teaches art history at the University of the Incarnate Word. Enriquez is an assistant city attorney for the City of San Antonio. The chairman of the endorsement committee is Mark Porter.

Stonewall sent invitations to all the candidates running in the May 9 municipal election that includes races for mayor, City Council and local school boards. To be eligible for an endorsement, candidates must fill out a questionnaire and appear at the forum to make a short presentation and answer questions from Stonewall members.

For this election, City Council members Rey Saldana, Shirley Gonzalez, Ray Lopez and Ron Nirenberg have already received the Stonewall board’s “friendly incumbent endorsement” that exempts them from submitting a questionnaire or having to appear at the meeting.

If deemed necessary by the Stonewall board, another vote may be held during their  monthly meeting on May 18 to consider additional endorsements for the June 13 runoff election.

The list of Stonewall endorsements has for years served as an important resource for voters in the LGBT and allied community. However, it has not been without controversy.

In 2013, Stonewall did not endorse then-Mayor Julian Castro because, in addition to not attending the endorsement forum, he did not submit a candidate questionnaire. “Central to the board’s decision was protecting the fairness and integrity of the endorsement process by not giving special treatment to one candidate,” then-Stonewall co-chair Elena Guajardo said at the time.

One year later, Stonewall stuck to their rules and voted not to endorse Wendy Davis for governor because she did not submit a questionnaire. As a consolation, Stonewall members approved a motion that the group would “refrain from endorsing a candidate for Governor in the 2014 Texas Democratic Party primary election, but extend best wishes to both candidates in this race and pledge to support the nominee of the party in the general election in November.”

In 2012, Bexar County Democratic Party chair candidate Manuel Medina came to the forum with 40 supporters for whom he purchased Stonewall memberships (at $35 a pop) so he could pad the vote for his potential endorsement. Medina did not get the endorsement only because Stonewall leadership began calling members who were not present, telling them to get to the meeting in order to quash Medina’s power play. In the end, Medina won the election and still holds the office.

Two years earlier, District 1 City Council candidate Mary Alice Cisneros did the same thing but not to the extent that Medina had done, bringing only a few friends who bought memberships and voted for her. She did not get the endorsement but went on to win the election.

Since the Medina incident, Stonewall changed the rules for who is eligible to vote on the endorsements.

Stonewall Democrats of San Antonio Candidate Forum and Endorsement Meeting, March 22 at 1:00 p.m. in the Fiesta Room of Luby’s Cafeteria, 911 N. Main Avenue. The meeting is open to all but only Stonewall members may vote on endorsements.

A View of Reality from a Chartreuse Couch*: Susan Yerkes

*My Own Private Alamo Gene: Hello, Susan. I am so delighted to have you visit the world-famous Chartreuse Couch, and...