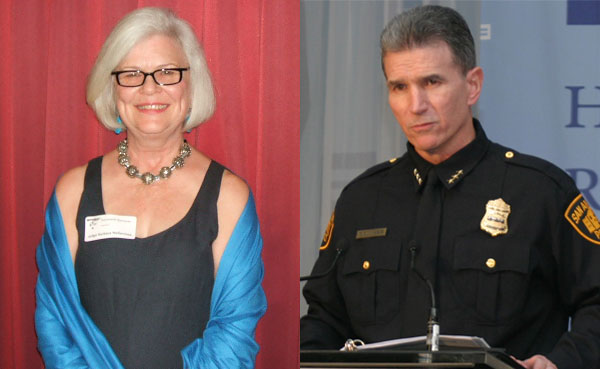 The Stonewall Democrats of San Antonio are planning a farewell for two local officials who are considered solid allies of the LGBT community and who are both leaving their current posts.

Stonewall co-chair, Elena Guajardo, told Out in SA that the group will be honoring Judge Barbara Nellermoe and Police Chief William McManus at their monthly meeting on Monday, November 17.

Since taking the bench as judge of the 45th District in 2003, Judge Nellermoe has heard numerous cases involving same-sex adoptions and child custody cases as well as legal name change applications for transgender individuals. Over the years, she developed a reputation for being a fair-minded arbiter when dealing with LGBT litigants.

Last April, Nellermoe denied a bid from the state of Texas to stop divorce and child custody proceedings between a lesbian couple.

In her decision Nellermoe wrote that “in a well-reasoned opinion by Judge Orlando Garcia, the federal district court found that a state cannot do what the federal government cannot — that is, it cannot discriminate against same-sex couples . . . By denying their parents the right to marry, Texas has created a suspect classification of children who are denied equal protection of the law under the Fourteenth Amendment.”

The judge has been honored by Equality Texas (2009 Advocate Award), the Stonewall Democrats of San Antonio (2008 Political Advocacy Award) and the local chapter of the Human Rights Campaign (2007 Equality Award).

Chief McManus will be leaving the SAPD at the end of the year to accept a position at CPS Energy as chief of security.

Stonewall co-chair Elena Guajardo says she remembers when McManus was hired 2006. She was a city councilwoman at the time and recalls that City Manager Sheryl Sculley convened citizens groups including several people from the LGBT community to review the applications of those who had applied for the position.

“It was the first time in city history when our community helped select a police chief,” she told Out in SA. Once McManus had the job, one of the first groups he spoke to was the Stonewall Democrats.

During his tenure McManus initiated LGBT sensitivity training at the Police Academy. He appointed the first SAPD liaison to the LGBT community and marched in the Pride Parade. In 2009, he was honored with the Equality Award from the Human Rights Campaign and given the Equality Texas Advocate Award in 2010.

In a recent interview with Out in SA, McManus said he would be open to extending the LGBT sensitivity training to cadets from the Park Police. The complete interview with the chief will be featured in the first print edition of Out in SA which hits stands on November 19.

The Stonewall Democrats of San Antonio host a farewell reception for Judge Barbara Nellermoe and Police Chief William McManus at 6:30 p.m. on Monday, November 17 at Luby’s Cafeteria, Fiesta Room, 911 N. Main. The event is free and open to the public.

State Sen. Donna Campbell of New Braunfels has proposed a constitutional amendment that would make it legal for Texas businesses...