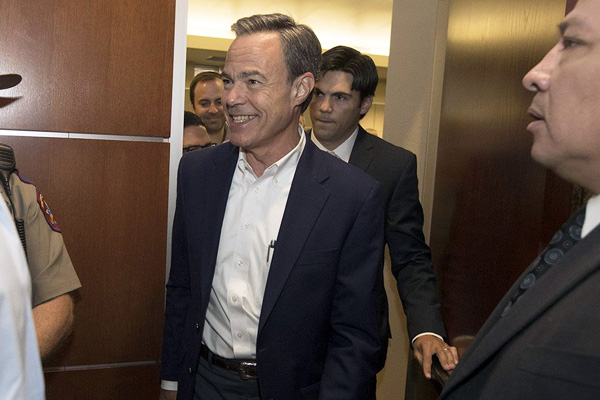 SAN ANTONIO — Texas House Speaker Joe Straus urged business leaders Tuesday to keep up the fight following the failure of legislative efforts this year to pass a “bathroom bill” that many of them opposed.

“Texans rejected name-calling and scare tactics, and as a result, we avoided a major mistake that would’ve cost our economy greatly and divided us unnecessarily,” Straus, R-San Antonio, said in a speech to the San Antonio Chamber of Commerce. “Now is not the time to walk away from the table. Going forward, working together we can do more than just avoiding mistakes.”

“We need the business community to stay engaged, and it begins with public education,” Straus added, invoking the House’s long-running goal of overhauling the state’s broken school finance system.

In Austin, Straus had been the highest-ranking official against bathroom legislation, a priority of Lt. Gov. Dan Patrick that would have regulated which restrooms transgender Texans can use. Straus opposed bathroom legislation during the regular session and a subsequent special session that Gov. Greg Abbott called in July to take up the proposal, as well as 19 other unrelated items.

Earlier in his speech Tuesday, Straus said the bathroom bill debate showed that sometimes “the most conservative solution is for government not to take action that isn’t necessary.”

Straus’ opposition to the bathroom proposal made him an even bigger target of some conservative activists than he already was. But it also made him a star among the audiences like the one he addressed Tuesday, which gave him an admiring reception as he spoke — particularly about the bathroom bill.

“Thank you all,” Straus said upon taking the stage to long applause. “I feel like I’m finally having my own quinceañera.”

This story has been edited for length. It originally appeared in The Texas Tribune at this link.